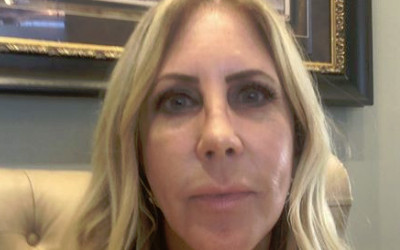 Vicki Gunvalson will soon be whoopin’ it up in Mexico. The Real Housewives of Orange County alum shared with her social media followers that she’s made a big purchase. The OG of the OC went all-in on a vacation-slash-retirement home in Puerto Vallarta, Mexico.

All of Vicki’s hard work at her insurance company seems to be paying off. After 30 years of vacationing in Mexico, Vicki bought herself and her family a vacation home that will double as her retirement home someday.

In a lengthy post, Vicki acknowledges that some fans might bash her timing, noting that “some of you may think that it’s wrong, especially given the state of the world.” However, the vacation property gives Vicki a sense of “hope and peace” that the world will be normal soon.

In fact, Vicki can’t even use her new vacation home at the moment. However, she’s already planning to remodel it and make it more “Vicki.”

She reveals that she plans to donate all of the bedding to local orphanages.

Vicki preempted any negative comments by asking followers to keep their mean comments to themselves. However, it turns out the warning was unnecessary. Aside from a few comments asking for clarification, most followers gave Vicki kudos.

One fan asked why Steve Lodge, Vicki’s fiancé, wasn’t included in the post. As other fans were quick to point out, he was. The original fan was seemingly unaware that tagging Steve’s IG account is the same as mentioning him by name.

Another fan asked if it was a home or a condo, saying it looked more like a condo. Vicki confirmed it was a condo, while one fan replied that a home is where the heart is.

Didn’t the RHOC alum already own a condo in Mexico? Vicki answered a fan who asked if the new vacation home was a timeshare. Vicki said it was. In fact, she has previously “owned” the property for two weeks, but now it is a permanent purchase.

Vicki shared a short video tour of the vacation home. Bravo TV reports that the condo has two bathrooms and three bedrooms, along with a balcony equipped with a hot tub.

Well I did it! After spending over 30 years in one of my favorite places in the world, I closed on my vacation/retirement house today. Other than being with my children, grandchildren and @stevelodge_oc, it’s one of my happiest and fondest memories and one of my parents favorite destinations. I know some of you may think it’s wrong, especially in the state of the world, but for me it immediately gives me hope and peace that things will resume to a new sense of normal soon. I won’t be visiting there until I’m able, but as of today I own a home that makes me happy. I’m going to be donating all the bedding and most of the furniture to an orphanage, and will be putting to work some painters and a decorator to make this home “Vicki”. Thank you to all who support my decision as it wasn’t an easy one to go through with it. Those who don’t, keep your mean comments to yourself. #imhappy #puertovallarta #sunsets #kindpeople #peaceful

While Vicki is looking ahead to her future, her RHOC co-star, Tamra Judge, took a look back. The CUT Fitness owner posted a video from an earlier season of RHOC. In the video, Vicki, Tamra and fellow alum Heather Dubrow take a ride on a helicopter.

Tamra captions the post, “the good ole days.” She has been quite open about her belief that RHOC isn’t the same without Heather, TV Shows Ace reports.

Both Tamra and Vicki exited RHOC earlier this year. Season 15 of the original Real Housewives franchise is currently on hold due to the coronavirus pandemic. Check back with us here at TV Shows Ace for updates on when filming resumes.