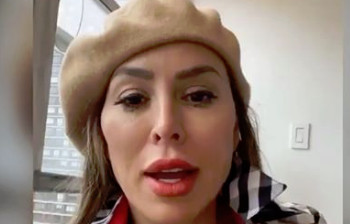 It’s been an eventful week for The Real Housewives of Orange County star Kelly Dodd. And it’s only Tuesday.

As TV Shows Ace reported, Kelly left a shady comment on co-star Shannon Beador’s Instagram post about a restaurant allowing people to use the outdoor patio without social distancing.

Kelly came under fire for a video she posted on her Instagram Stories on Monday. In the video, the reality star mistakenly says that Orange County, California, hasn’t had any deaths from coronavirus.

She was back on social media by Tuesday afternoon to clarify her comments. What, exactly, did Kelly say?

RHOC Star Dines Out in OC, Gets Slammed by Fans For Not Wearing a Mask

The restrictions against seated dining in Orange County seem to have lifted sometime after Shannon’s weekend post. Kelly posted a series of videos to her Instagram Stories of her enjoying dining out on Monday, May 25.

Kelly’s mom, Bobbi, and daughter, Jolie, among others, joined Kelly at an indoor table. Before entering the restaurant, Kelly filmed patrons dining outside on the patio, too.

In the videos, Kelly can be heard celebrating getting to “have a meal out.” She says twice that “no one is wearing a mask.”

The video pans across the room to show a spattering of patrons, none of whom look to be wearing masks. Neither Kelly’s mom or her daughter are either, but they are also eating at the time.

All of the restaurant workers seen in the footage are, however, wearing masks.

The RHOC star riled fans when she said that no one is wearing a mask because there haven’t been any coronavirus deaths in the OC. In the video, she can be heard saying, “No one is wearing masks here in Orange County. Yup, because no one is dying here of the virus.”

Us Weekly reports that 131 people have died from coronavirus in Orange County, California, 14 of them occurring just last week, on May 21.

Along with the videos, Kelly also posted a written message to her Instagram Stories about rights and liberty. Kelly believes it’s the “government’s job to protect” her RIGHTS. However, it’s her job to protect her health. She writes, “When you trade liberty for safety you end up losing both.”

#KellyDodd is dining out as #OrangeCounty lifted restrictions and opened up malls and restaurants. The #RHOC star says no one in OC is dying or wearing masks anymore. #realhousewives #realhousewivesoforangecounty #bravo #bravobravofingbravo

Needless to say, Kelly’s comments didn’t go over very well with RHOC fans. This is hardly the first time Kelly’s put her foot in her mouth about coronavirus. It’s not even the second. While she didn’t offer an apology for her comments this time, she did clarify them.

She says that she didn’t intend to minimize deaths from coronavirus. Kelly claims she was “encouraged” by the fact that OC only has “133 deaths out of 3 million people.”

The RHOC calls out Us Weekly and Page Six specifically for reporting that she wasn’t wearing a mask when she went out to eat. She assures fans that she WAS wearing a mask prior to eating. However, she points out that “you can’t eat with a mask on.”

Kelly even throws her mom under the bus by pointing out that Bobbi wasn’t wearing a mask at all.

Clarify to @usweekly and @pagesix

Despite her clarification, fans still want to #cancelKellyDodd.

Tell us – do you think Bravo should respond to the things Kelly’s been saying the last few weeks?

The Real Housewives of Orange County will likely resume filming again soon now that California is lifting restrictions. Check back with TV Shows Ace for updates.