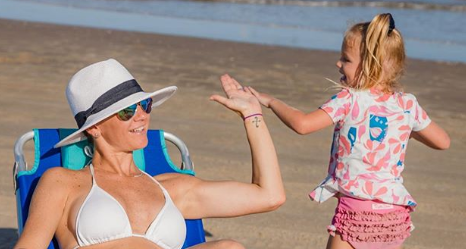 OutDaughtered star Danielle Busby and her family are celebrating Memorial Day with the rest of the United States. Roughly an hour ago, mama Busby took to Instagram to share a beautiful tribute to the special day. The post featured all six of her girls watching a large American flag being raised.

All six of her beautiful girls were featured.

Typically, posts on Adam or Danielle’s Instagram feature just a few of their children. After all, they have six and the photo quickly becomes crowded. So, getting to see all six of their beautiful girls in the same photo is always a real treat for OutDaughtered fans. Danielle (and probably Adam too) stood behind their daughters and snapped a photo while watching the flag get raised into the air.

Four of the quints rocked adorable pig tails. The fifth quint looked to have her hair in a single pony tail. She had her hands in her hair playing with it… So, it was hard to tell for sure. The quints also wore matching red shirts with white shorts. From the back, with matching clothing and hair, it was incredibly difficult to tell the quints apart. Thanks to her curly red hair, however, fans could easily make out Hazel.

Towering over her little sisters, while rocking a blue and white outfit, Blayke was also easy to spot. Together, the colors of Blayke and her sisters’s clothing resembled the large American flag they watched being raised up the pole.

Fans were quick to thank Danielle Busby for the sweet photo.

Any time Danielle or Adam Busby posts on Instagram… It attracts a lot of attention. Seeing the quints in matching outfits while celebrating Memorial Day with their older sister Blayke certainly warmed a lot of hearts. A few noted that it took a minute to realize it was Blayke standing with her sisters. She has grown so much lately that some fans thought she looked a lot like her mother, Danielle!

Here’s some of the other things OutDaughtered fans had to say about the sweet photo:

One OutDaughtered fan noted it had been a little while since they saw photos featuring Riley. With several likes, other fans clearly agree.

So, can you tell the quints apart in the Memorial Day tribute? Sound off in the comments down below!