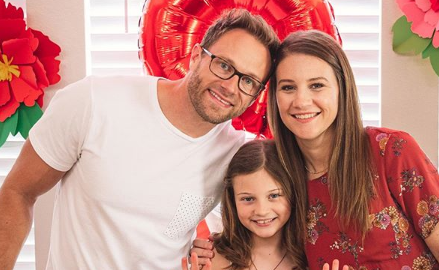 With COVID-19 keeping people in their homes, parents are having to get creative with birthdays. The same is true for Adam Busby of Outdaughtered and his wife with six girl’s birthdays. Their oldest just turned nine.

Adam had a special surprise for daughter Blayke Busby. He got one of her favorites to wish her a happy birthday. Blayke is a huge fan of JoJo Siwa. One fan who follows the family said, “Big Time ‘Dad of the Quarantine’ move right there.”

Adam Busby called in a favor and made his little girl’s birthday special. On Instagram he said, “having a kid whose birthday falls within this quarantine time is a huge bummer for them.” Adam said seeing the look on her face was worth it. Busby said, “I scored some major dad points from this little girl!”

Most fans thought this was a very sweet thing to do for his daughter. But, as there always is with reality television stars, there were critics. One said he made other kids not feel special because they didn’t get a call from JoJo.

Adam shot that down. He said, “With all due respect, our family is a little extraordinary. My children are celebrities themselves and over the years have worked with and made friendships with other celebrities.” Busby noted they’ve taken pictures and been around celebrities a lot. He also said the girls knew each other in real life and there as no reason for the commenter to twist it and see something negative in it.

Having a kid whose birthday falls within this quarantine time is a huge bummer for them(much less 6). We had to postpone Blayke’s Birthday Party until we no longer have to be distant from everyone, so i called in a favor from a friend. Seeing the look of surprise on her face when she saw @itsjojosiwa wishing her Happy Birthday over FaceTime was absolutely priceless. I scored some major dad points from this little girl! #jojo #jojosiwa #BirthdayMade #bestbirthdayever #happybirthday #quarantine #dadlife

The Show Has Paused Filming For Now

This of course means the other five girls will get something special for their birthday. Last year Adam Busby and his wife threw them a Luau and gave them a French bulldog. The quints are turning five this year in April! It’s sure to be a great time even if they do have to celebrate at home.

Like a lot of shows, the family isn’t quite sure when they’ll start filming again. Filming is on hiatus right now for Outdaughtered due to the Coronavirus outbreak. When a fan asked when they could expect the show back, Adam replied. He said, “unfortunately we can’t exactly have a camera crew following us around and going places right now.”

According to The Cheat Sheet, Adam said hopefully the Busbys can make new episodes soon when COVID is behind them. Fans will continue to follow their daily quarantined lives on social media.