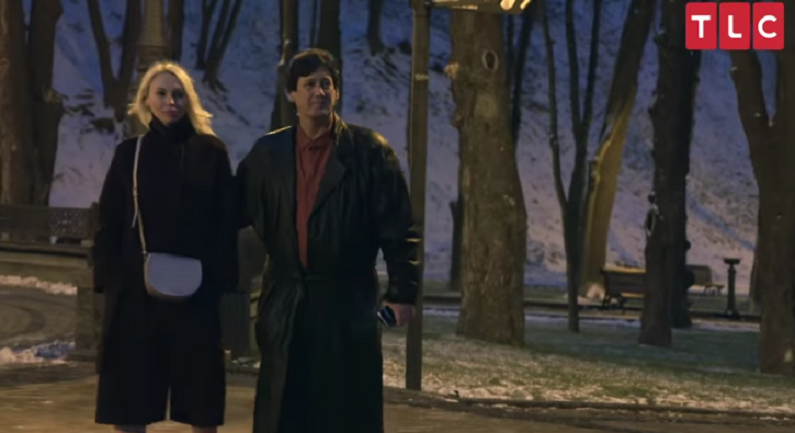 Sunday night’s episode of 90 Day Fiance: Before the 90 Days made viewers cringe. The plot twist of this season: 28-year-old Lana finally agreed to meet 60-year-old David Murphey. David is overjoyed to find out that Lana is real. But, the couple are at a loss for words when it comes to communicating in person, per Entertainment Tonight.

Lana knows very little English, so they have to use a translator app on David’s phone communicate. She tells the TLC producers that it is too soon to kiss him on their first date. She is clearly uncomfortable whenever David makes any advances.

Lana also got upset when David revealed that he hired a private investigator to find out more information about her after she made excuses not to see him during his previous four visits.

After hearing this, she excused herself and said she needed to go home after their first two-hour meeting together. Lana later admitted to the TLC producers that she didn’t give him he real address in Pavlohrad because she doesn’t know him well enough. She thought it was “insane” when she discovered that David tried to find her. But, she eventually agreed to a second date with him.

David is smitten with Lana and it shows. He took her out on a second date after their failed first meeting. The two went to the bowling alley. David excitedly told the TLC producers that he was a professional bowler in his 20s. However, his bowling skills looked rusty as he struck out several times.

TLC star is over the moon with their relationship

David is thrilled to give Lana a kiss. He also tries to get as many photos as possible for their K-1 visa application, per E! Online. While she admits that she loves receiving gifts and money from David, she continues to avoid his romantic advances. She even declined his offer to go to his hotel room after their date.

Lana tells the 90 Day Fiance cameras that it’s too soon for her to be intimate because she’s still figuring out her feelings for him. David was disappointed when she turned down his offer to spend the night with him at the hotel.

He told the cameras that he wanted to propose to Lana to bring her to the U.S. on the K-1 visa. But, she has to show him more affection first.

Per Screen Rant, viewers cringed during Sunday night’s episode of Before the 90 Days. They were especially creeped out by David, who wanted to get his hands all over the Ukrainian woman. First, he tried giving Lana a hug during an interview which had her feeling confused.

Viewers think Lana wouldn’t be happy moving to the U.S. to live in an R.V. with a man in his 60s. It was previously revealed that David dated over a hundred Ukrainian women before finding the one. Whatever the reason behind it, fans are creeped out by David’s feelings for Lana and don’t see their relationship progressing anytime soon.

LOL! The way David stares at Lana is hilarious and creepy all at the same time #90DayFiance

Geeze, I think I like David even less now that I know Lana is real. Before he was naive and delusional. Now he's creepy, desperate and infantalizing. #90DayFiance #BeforeThe90Days

What are your thoughts? Do you think David Murphey was too creepy towards Lana on their date? Sound off below in the comments section.

Tammy Slaton Fans Wonder What’s Going On With Her On TikTok
Has Lauren Caldwell’s Engagement Been Addressed By Family Yet?
Could ‘Dancing With The Stars’ See Another Deaf Champion With Abigail Heringer?
Is Robyn Brown Financially Independent Of Kody?
Abigail Heringer Tells Followers Not To F**K With Her