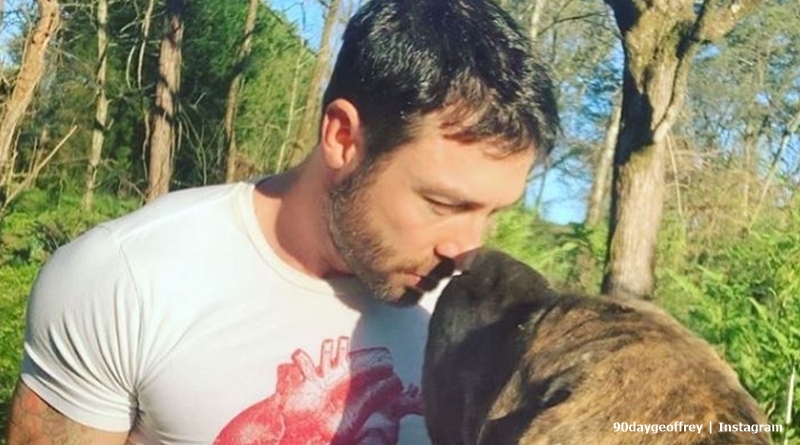 90 Day Fiance fans know that Geoffrey Paschel’s a nature nut. He’s also a bit of a health nut, forever working out and staying healthy. So, it really looks like he’s got a handle on a holistic approach to life. But, beset by trollers and haters over his chequered past and pending court case, he seems rather vulnerable. Nevertheless, despite all the hate, he accumulated lots of loyal supporters. Now, he spoke to TV Shows Ace about his love for nature and what inspires him.

If TLC viewers never heard of Geoffrey’s criminal past or his impending court case involving abuse allegations, he’d probably be the hottest star on the show yet. That’s evidenced by the number of loyal fans who drool over him. Who could resist a guy with amazing abs, a body carved out of a tree, and a love for nature? But, even the best of the human species comes with failures and regrets. They face challenges and sometimes overcome them. But it seems that trolls won’t let Geoffrey move on, despite not being found guilty of the abuse allegations. In fact, the case was delayed due to coronavirus.

The 90 Day Fiance star, obviously troubled by all the hate, spoke out against it in an Instagram post back in late April. It came after Stephanie Matto took a hiatus from social media because of all the hate. Geoffrey reminded viewers that hate kills. TV Shows Ace reported that he said trollers should “think about the kids, the parents, the friends…it moves faster than the 6 degrees of separation by an exponential amount.” Finally, he ended with, “be nice, people. Words kill. Even the mighty can fall by only a wisp of wind.”

Nature-loving Geoffrey follows a path to serenity and happiness

Fans know that Geoffrey spent time in prison as a young man. Perhaps he should have stayed with his natural instinct to live and work in the wilderness. He went to jail for drug offenses, and openly admits he made mistakes. He told us in our exclusive interview that he always felt a hankering for natural sciences. In fact, he said, “Since I am an outdoor enthusiast, I really enjoyed my life science and ecology courses in college. They allowed me to get even closer to nature.”

It seems that other subjects only engaged him if his teachers were “enthusiastic and passionate.” Now out of prison, he seeks solace in nature. And, that indicates he’s one of the lucky few. According to a study cited by the BBC, there’s a “scientifically significant increase in people’s health, [and] happiness,” when they connect “with nature.” The 90 Day Fiance star said, “I prefer to be outdoors as much as possible.” When it comes to his favorite meal, he won’t give you a “thank you” for a candle-lit dinner. He noted, ” hands down, my preference is a barbeque where I dress up for no one and get my hands dirty.”

Many people think because I’m on tv, I don’t work. Day in and day out, I am getting it done. But you’re right for the most part, I’m just weeding out all the BS I’ve let accumulate throughout my life. This is the ultimate spring cleaning and we all should do it… It’s 2020, the hindsight year—time for us all to do what we need to do to be better people. . . . . . . #90dayfiance #90dayfiancebeforethe90days #beforethe90days #usa #work #sweaty #knoxvilletennessee #knoxville #knoxvilletn #labor #reallife #real #enjoylife #confinement #daretobedifferent #coronavirus #quarantine #humbled #manly #beautiful #outdoors #strong #progress #fightthenorm #countryboy #geoffreypaschel

Not surprisingly, one of Geoffrey’s favorite movies includes Shawshank Redemption. As he points out, “obvious reasons, maybe.” Recall that in the movie, Andy Dufresne ends up in jail for two consecutive life terms in prison. He knows he never committed the murders that landed him in jail. Geoffrey claims his innocence in his pending court case, and naturally feels an affinity with the storyline.

But his other favorite, Dumb and Dumber, maybe points to other regrets in his life. The movie’s hilarious but in it, Joe Mentalino hitches a ride with Harry and Lloyd. During the ride, Lloyd asked Joe “Hey, you wanna hear the most annoying sound in the world?” He delivered a high-pitched screech. As Screenrant pointed out, “If nothing else, this is an incentive to vet the people you go on long road trips with.” Perhaps the 90 Day Fiance star should bear that in mind in his future choices.

What inspires 90 Day Fiance star Geoffrey and would he make different choices?

Geoffrey said, “my inspiration mainly comes from constantly reflecting on my decisions and experiences. I am always seeking to continually improve and learn from experiences.” No specific person inspires him, he noted. He mentioned, “I really cannot name a specific person that inspires me, but I am motivated by anyone who has overcome challenges when the odds were against them. I am also inspired by my children. Seeing and knowing they are happy reinforces my desire to always be better.”

We asked him: “if he could go back in life and make a different decision, what would that be?” Honest, Geoffrey replied, “I have not led a narrow or straight path in life,” However, his “journey has made [him] identify what is most important in life” These include “being optimistic and making a positive difference in the lives of others, no matter how small.” The 90 Day Fiance star added, “There are many decisions I am not proud of, but they have all taught me something worthwhile.”

What do you think about these insights?

What do you think of these revelations by Geoffrey? Do you agree that he probably finds serenity and happiness in nature? He made some bad decisions and choices along the way, as most people do. Perhaps if he stayed with his initial instincts, he may never have ended up vilified and hated as he awaits his opportunity to defend himself in court. Sound off in the comments below.