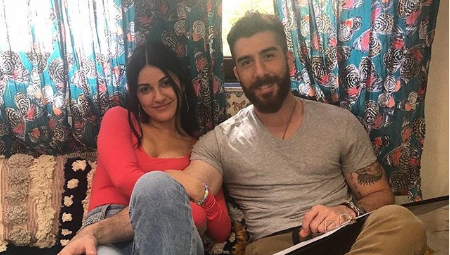 Rudi Gutierrez and Matt Ranaudo are two very talented contestants on Listen to Your Heart. They sing together beautifully, but recently when Rudi told him she was falling for him, he didn’t really have the same response. Matt has said in interviews he really likes her, but he doesn’t want to say something he doesn’t mean. Their connection on stage got them into the final three, but they still aren’t sure where they are romantically.

Now that the cast is able to watch back the show and see what happened, they can talk about it. Matt’s response to Rudi telling him she was falling for him was a cringey moment. He said, “you’re very courageous for speaking your truth, and I appreciate you doing that. This prompted Rudi to get up and go cry away from him. During an interview with ET, Rudi got to watch it again and address the awkwardness of the moment.

What Did Rudi Gutierrez Say About Matt’s Response?

Rudi Gutierrez laughed after watching it again. She said, “I love that for me. It was one of the most awkward things of my life.” She said she isn’t the type to tell a guy how she felt first. The first time she decided to, she said of course it was on TV and he didn’t reciprocate. Rudi admitted, “it sucks to see that back, I’m not gonna lie. But I still don’t regret it.”

Matt was happy with their performance of, “Shallow,” and talked about how he wanted to keep making music with Rudi forever. He didn’t say he was falling and still seemed pretty unclear about his feelings. She said she was just waiting on him to say something and what he did say was a jab in the stomach.

Did The Two Hook Up On Their Detour Before Vegas?

Rudi Gutierrez and Matt took a detour and stayed in a hotel before they met up with the other contestants in Vegas. Fans wanted to know if they hooked up during that time. Rudi said, “no, we did not hook up. It was some wild snuggling. We got a lot of good, passionate makeouts in there.”

Rudi said Matt, “was being as transparent as possible.” She said he could have done better, but it was hard for him. Rudi said he’s not a bad guy .” Rudi gave a little insight into what the finale would be like. She said, “I think this next episode on Monday is gonna be a little rough. Some good tears, some bad tears.” The trailer does show her crying, but it also shows the other contestants emotional as well. Only one couple can come out victorious and fans can’t wait to see who wins. Listen to Your Heart airs Mondays on ABC.