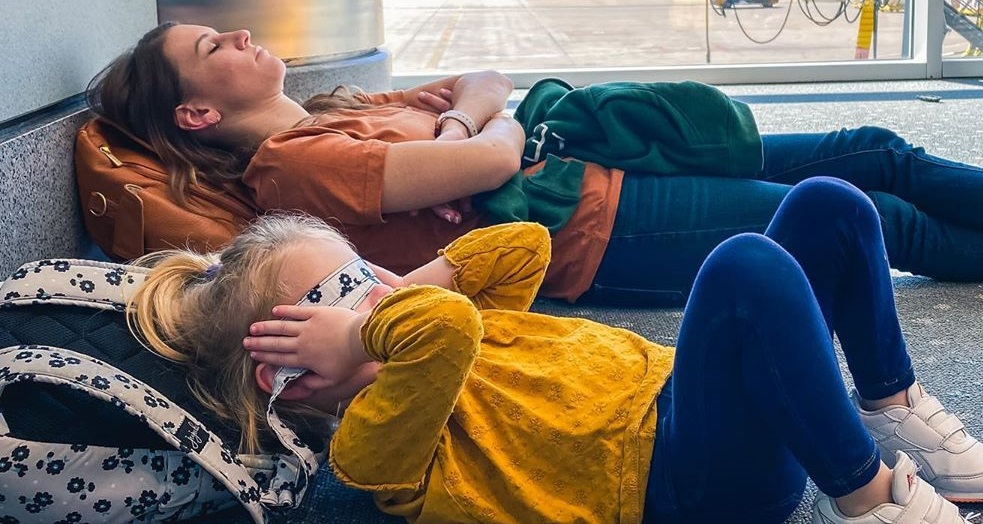 Adam Busby set Instagram on fire with a breathtaking snap of his wife Danielle rocking a gorgeous bikini. The incredible photo was another of the many beautiful snaps from the family’s recent spontaneous trip to the beach.

The photo featured the OutDaughtered mother-of-six flaunting her slender frame and showing off some serious skin. She rocked a barely-there bikini with a white top and vibrant pink bottoms. While exposing a generous amount of skin to the sun, she donned a white sun hat and a pair of shades.

In the photo, she was walking across the wet beach with two of her quints trailing just behind. The girls behind her looked to be examining seashells they were hard at work finding in many of the other snaps Adam shared on Instagram recently.

Part of what was so captivating about the photo was the beautiful and crisp colors Adam managed to capture when he took it. Naturally, fans wanted to know more about how he managed such a gorgeous photo. Was he editing it in some special software to get it to look so fantastic?

One of his fans noted in the comments they were an aspiring photographer and wanted to know how he managed such an incredible photo.

To everyone’s surprise, Adam revealed he didn’t do anything that special to get such a great photo. In fact, he edited it completely from his phone. Unfortunately, he didn’t appear to come back to reveal what the name of the app he used on his phone to edit the photo was.

In awe of this beauty. I cant help but be inspired and encouraged every day to be a better dad and husband by having her by my side. This life gets hard and times get tough, but I’ll never stop fighting for you or beside you @dbusby . #mylove #mynumberone #itsabuzzworld #outdaughtered

After that, the topic of conversation shifted to his beautiful wife. One individual tagged her and questioned what she did to obtain such a flat looking stomach.

OutDaughtered fans are in awe of Danielle’s flat stomach.

As those who follow Adam and Danielle Busby know… They welcomed the first all-female set of quintuplets into the world five years ago. Many fans are in awe regarding how fantastic Danielle looks even though she carried five little ones in her stomach at the same time. Moreover, we can’t forget she also has a six child that she had a few years prior to having the quints.

As we previously reported, Danielle Busby admitted the pregnancy came with a lot of extra skin. She, however, worked REALLY hard on her core.

Being stuck in a room looked very different to us 5 years ago as we were anticipating the arrival of our 5 miracles. We trusted that God was in control through that uncertainty and we are trusting him through this time still. Pull up a seat and relive the first season of @outdaughtered with us today on @TLC starting at 3pm eastern. #outdaughtered #itsabuzzworld

Here’s what some OutDaughtered fans had to say about the smoking photo.

Unsurprisingly, there didn’t appear to be a negative comment anywhere. OutDaughtered fans really do love Adam and Danielle Busby.