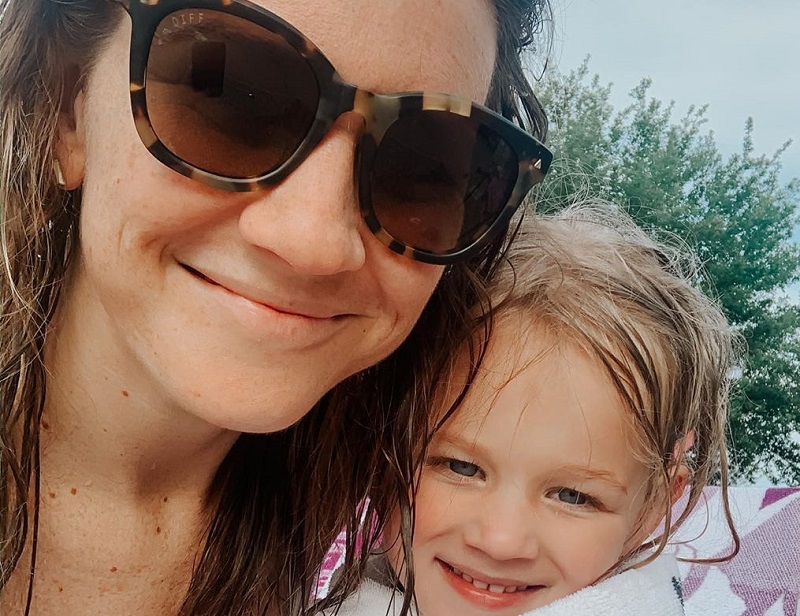 Danielle Busby recently got candid with her followers about the aftermath of pregnancy on her body.

As everyone knows, pregnancy is HARD on the human body. Sure, it is a natural part of life. It is something women have been doing since the beginning of time. But that doesn’t make it an easy or simple process. Growing a human inside of another human causes all sorts of changes to the human body. Unfortunately, for some women, their body never completely goes back to the way it was before.

Danielle Busby gave birth to the first all-female set of quintuplets in the United States.

OutDaughtered star Danielle Busby carried and gave birth to FIVE beautiful little girls at the same time. This is, in addition, to their older daughter Blayke that she also gave birth to. So, it goes without saying, that pregnancy likely did some damage on Danielle Busby’s body.

Fortunately, Danielle and her husband Adam have always been open and honest with fans. They tend to respond to a lot of questions from fans. They go out of their way to explain things. Danielle Busby is no stranger to being candid on both Instagram and her blog about her post-baby body and about her pregnancy.

A fitness guru, Danielle Busby is always posting advice for mothers. Unsurprisingly, fans constantly wonder how she manages to do so much with so many children. Moreover, they wonder how she looks so fantastic after giving birth to so many little girls.

Been wondering why my shoulders have been so sore…guess this is why 😊 “Push me! Push meee! Mama push meeee! MAMA! Pushhh me!” Said the Quints #mamalife #girlmom #itsabuzzworld #outdaughtered

Recently, however, she got real with one of her followers regarding her loose skin after carrying and giving birth to the quints.

Danielle Busby shared a photo of herself working out with two of her quints right beside her a few days ago on Instagram. The three were doing cool down yoga at the time. Mama Busby revealed in her caption that Parker and Ava joined her for her workout.

In the photo, Danielle rocked a dark grey speckled sports bra. This caused much of her torso to be exposed. Unsurprisingly, the exposed tummy caused fans to ask questions.

“I’m honestly curious. I’ve always noticed how great you look after having had 5 kids. I know you workout all the time, but how did you not have extra skin? It was it removed?” One follower questioned in the comments.

Both Danielle and Adam Busby have always been adamant that she did not have any cosmetic work done following the birth of her children. So, this was the type of question mama Busby felt compelled to reply to.

no surgery like that, No tummy tuck. I do have extra skin after having girls. I took amazing care of my on belly during pregnancy bc I knew it would stretch and hurt, and it did. But lots of oils and creams helped during the pregnancy time.”

Danielle Busby also explained that she enjoys working out her core. So, she put a lot of time and effort into making her stomach look the way it does.

I had some workout buddies this morning! Parker & Ava sat and watched me during me Hiit Workout. They kept asking me the whole time “Mama is that hard? Mama are you sweating? Mama you supposed to do it like she is in the tv. Mama does that hurt? Mama….” I’m pretty sure I laughed during my whole workout. So many questions and critiquing 🤣 I asked them to join me but they both said no way 🤪 However, I did a yoga cool down after and these two birds love yoga and did the whole session with me! They did so great! #namaste #yoga #messyroom #whatsnew #stayhome #athomeworkouts #itsabuzzworld

As always, OutDaughtered fans are thrilled Danielle Busby isn’t afraid to get so candid with them on social media.