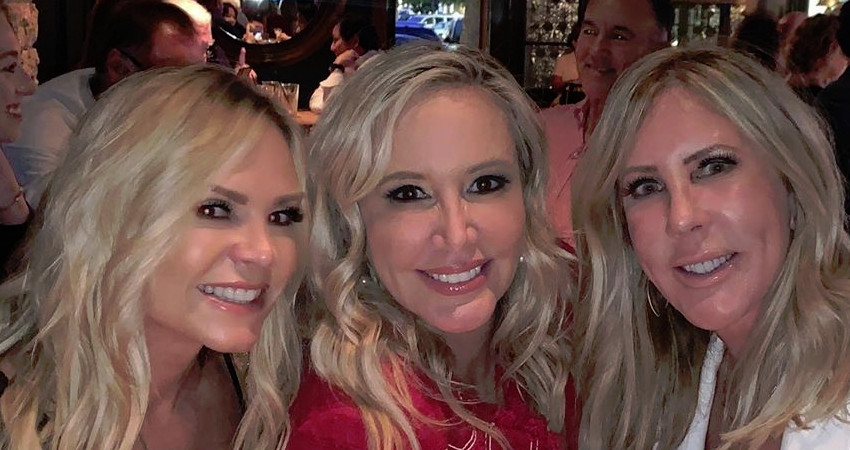 The tequila amigas!!! 🥃 A 1 hour instagram live with these two brings enough laughter to last a whole week LOL I cant stop laughing at the music, Vicki dropping her a phone, and then best of all Tamra switching her lighting on and off and Vicki thinking there was something going on with the lighting at her house 😂 Things like this just remind of how much they’ll be missed and how different RHOC will be from now on. Feeling both sad that they won’t be on but also happy that we still get to see them continue as close friends 🍊• #vickigunvalson #tamrajudge #rhoc #tresamigas #bravotv #realhousewivesoforangecounty • @vickigunvalson @tamrajudgetamrajudge

But that wasn’t the only shots they were taking. The RHOC alums dished on some leading ladies from the other Real Housewives franchises. Tamra and Vicki opened up about the last conversation they had with co-star Shannon Beador before their Tres Amigas friendship broke down.

Tres Amigas lost a member when Tamra confirmed earlier this week that she’s no longer friends with Shannon. As RHOC fans know, Tamra, Vicki and Shannon were so close, they gave themselves a nickname: ‘Tres Amigas.”

However, during a chat with fans over the weekend, Tamra admits she now thinks Shannon was only her friend for the show, TV Shows Ace reports.

Tamra and Vicki addressed the demise of their friendship with Shannon on May 5 during the Instagram Live. Tamra admits that she isn’t sure “what happened.”

According to Tamra, Shannon stopped answering her calls after Tamra and Vicki left RHOC after Season 14. Tamra says.

“Love Shannon. Don’t know what happened. We were great friends. Vicki and I announced we were not coming back and she stopped communicating with us. End of story.”

Tamra denies there was any kind of falling out. Vicki agrees. Vicki says that during their last conversation, she said to Shannon, “Don’t forget about me.”

Once fans started to get negative toward Shannon in the comments, Vicki and Tamra changed the topic.

Vicki Shades RHONY’s Ramona Singer: She Didn’t Start The Real Housewives, ‘I Did’

Shannon may not be fair game, but Vicki had no problem taking aim at The Real Housewives of New York’s Ramona Singer. The two had words at BravoCon last year over Ramona saying she started the Real Housewives shows.

Apparently Vicki is still holding a grudge, Us Weekly reports. After shading Ramona’s “Big eyes,” Vicki made it clear who the OG of The Real Housewives is. Of Ramona, Vicki said, “She thinks she founded the Housewives and she didn’t. I did.”

In addition to her grudge against Ramona, Vicki seems to have a hard time letting go of being a Housewife.

She said during the chat that getting “fired” was her biggest regret. Furthermore, Vicki said, “I don’t want to NOT be a Housewife anymore.”

However, Tamra encouraged Vicki to move on. She advised her friend that “successful people…don’t dwell on the past.”

There’s certainly no love lost between Tamra and RHOC co-star Kelly Dodd. However, after feuding during Season 14, Vicki and Kelly called a truce. But that doesn’t make them friends.

After dubbing Kelly as “completely unpredictable,” Vicki said Kelly can turn on her friends quickly.

The former RHOC star shaded Kyle as “Kind of vanilla.” Vicki notes that Kyle plays it safe to avoid conflict.

Vicki must not have seen the preview of Kyle telling Lisa Rinna to “f**k off” during the May 6 episode of RHOBH.

Next time on #RHOBH: Kyle feels attacked! All-new Wednesday night @ 8/7 only on @BravoTV! 💎