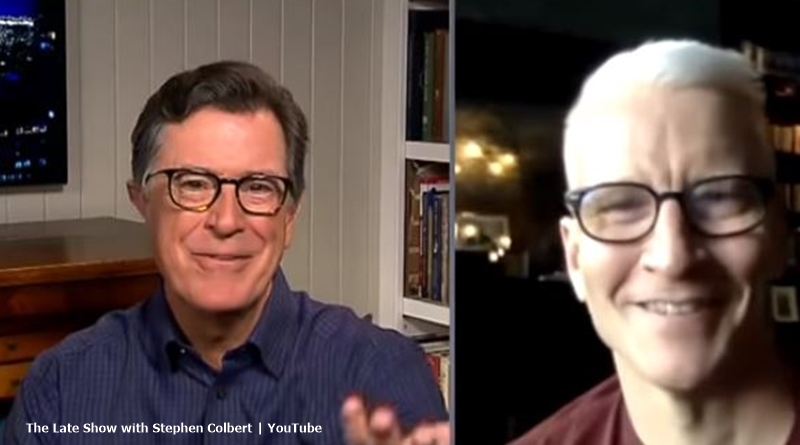 Anderson Cooper shared the birth of his son at the end of April. Very excited at being a brand new dad, he never expected he’d be able to do that given his same-gender preference. He admits that Andy Cohen’s experience with his child Ben made him realize that he too could father a child through surrogacy. Apart from the joy of parenting, Anderson just discovered that coffee and raising babies go hand in hand.

TV Shows Ace reported that when Anderson announced the birth of little Wyatt, Andy also shared a photo of his friend with Wyatt. One of the first celebs to congratulate his friend, Andy knows how wonderful a child is. While Andy mulls a possible second child, he helped out Anderson with all of Ben’s hand-me-downs. Grateful, Anderson said that during COVID-19, there are not so many options for good shopping right now. So, he accepted the gift.

The new info from Anderson Cooper came when he chatted with Stephen Colbert on The Late Show last night. Joking, he said that he hoped his son would be a “Depression Era child who grows up wearing hand-me-down clothes.” However, Anderson doesn’t mind thriftiness, and no doubt the opportunity to shop for Wyatt comes in the future. He also told Stephen that Andy made him realize that a child of his own could become a reality.

I want to share with you some joyful news. On Monday, I became a father. This is Wyatt Cooper. He is three days old. He is named after my father, who died when I was ten. I hope I can be as good a dad as he was. My son's middle name is Morgan. It's a family name on my mom's side. I know my mom and dad liked the name morgan because I recently found a list they made 52 years ago when they were trying to think of names for me. Wyatt Morgan Cooper. My son. He was 7.2 lbs at birth, and he is sweet, and soft, and healthy and I am beyond happy. As a gay kid, I never thought it would be possible to have a child, and I’m grateful for all those who have paved the way, and for the doctors and nurses and everyone involved in my son's birth. Most of all, I am grateful to a remarkable surrogate who carried Wyatt, and watched over him lovingly, and tenderly, and gave birth to him. It is an extraordinary blessing – what she, and all surrogates give to families who cant have children. My surrogate has a beautiful family of her own, a wonderfully supportive husband, and kids, and I am incredibly thankful for all the support they have given Wyatt and me. My family is blessed to have this family in our lives I do wish my mom and dad and my brother, Carter, were alive to meet Wyatt, but I like to believe they can see him. I imagine them all together, arms around each other, smiling and laughing, happy to know that their love is alive in me and in Wyatt, and that our family continues.

The CNN host never really enjoyed coffee before Wyatt came home. He explained that his favorite new beverage helps him cope with the hours babies keep. Naturally, he tried the odd cup of coffee in the past. However, he realizes now, that parenting puts a whole new spin on it. He said, “I can’t believe I have gone so long without coffee.” Actually, he normally prefers soda, In fact, historically, Anderson never cared for hot drinks. Notably, he never really “got the point” of them.

Now, after a few odd sleeping hours, Anderson Cooper became a convert. He told Colbert, “Now, I totally get it.” He added that he’s now “addicted and it just snaps your mind into focus. I wake up, I think of my son first but caffeine” comes next. Anderson also talked again about the birth.

In his original Instagram post about Wyatt, he thanked the surrogate mom for the care she took with Wyatt. In fact, he mentioned now, that he actually witnessed his baby being born. He’s struck by the way life arrives. After all, he witnessed his mom pass away, and now he experienced the other end of the life spectrum.

In his interview with Anderson Cooper, Stephen Colbert thanked him for bringing some good news into the world right now. Certainly seeing the brand new dad smiling lifts the hearts of many people who suffer through the pandemic.