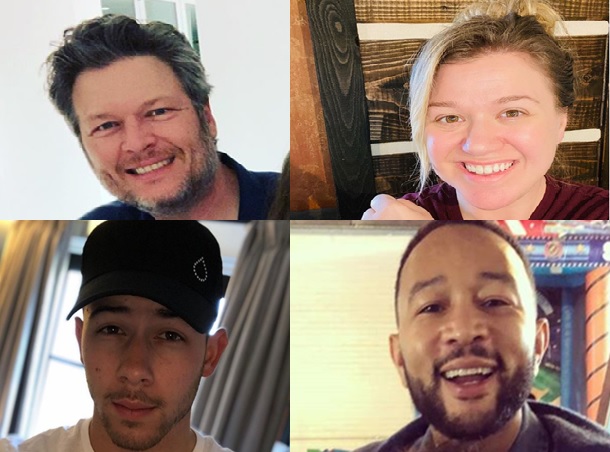 Due to the coronavirus, several TV shows have changed their schedules and delayed airing and production. However, in the midst of the chaos, NBC’s The Voice will continue to air. American Idol recently moved their show to a remote format, and The Voice plans to do the same. Host Carson Daly and coaches Blake Shelton, Kelly Clarkson, Nick Jonas, and John Legend are excited to resume the season virtually.

To kick off the remote airing of The Voice, Daly invited the four coaches to a virtual happy hour. Shelton, Clarkson, Jonas, and Legend joined Daly for the happy hour via video chat. The four reunited with each other and prepared for the first remote episode of The Voice.

In an exclusive video of this happy hour from E! News, the coaches set up their home production studios. The show’s 17 contestants do the same. Some seem to have no problems putting the equipment together, while others are confused and overwhelmed. At one point, Shelton even pulls out a chainsaw.

How the team plans to continue

While airing remotely, The Voice will follow the same concept as before. Now, however, the coaches and contestants will film themselves from their own homes. Besides a small production crew, Daly will be the only person at the studio, where he will host the show. The show will air live on Mondays and Tuesdays. Viewers can expect to see remote coaching via video calls, live home performances, and the contestants’ reactions as they hear the results.

The Voice coaching sessions will be recorded live ahead of time to air on Mondays. This means that the interactions between the coaches and their contestants via video calls will take place in the week before the show airs. Since they will be recorded live, there will be little to no editing before they air. Fans can still watch performance preparation activities, including choreography and outfit planning. Performances will also air on Mondays, but these will be pre-taped. On Tuesdays, contestants will hear the results from the previous day’s performance. This will be live, so viewers can enjoy this experience from their homes at the same time the contestants do.

Although the pandemic led to a change of plans, the host, coaches, producers, and contestants look forward to resuming The Voice. The first remote episode will air on NBC Monday, May 4 at 8 p.m. ET. Executive producer and showrunner Audrey Morrissey tells E! News, “It has been an incredible team effort with the coaches, artists and their loved ones being involved in the process. With Carson at the helm from the stage, we are excited to share a unique Voice experience that will feel both new and familiar.”

Will you be tuning in to the show this week? Who do you think will move on to the top nine?