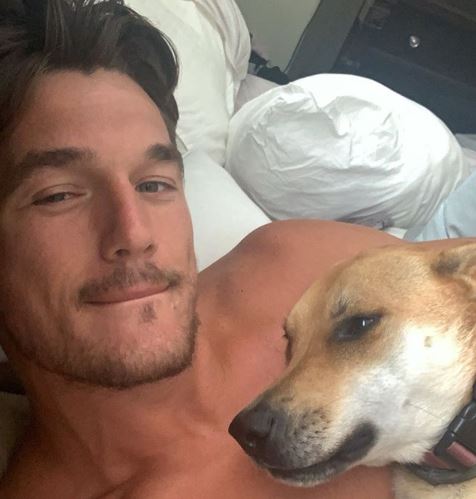 Tyler Cameron decided to have a wild night in with his boys. This came after news spread that his ex-girlfriend Gigi Hadid is pregnant with her first child. On Tuesday night, the 27-year-old Bachelorette alum hung out with his friends on social media. Their wild night indoors involved empty bottles of alcohol. Read on to learn more about Tyler’s crazy night with his quarantine crew.

According to Us Weekly, Tyler Cameron wore a salmon-colored blazer and navy shorts as he sang into an empty wine bottle alongside best friend Matt James on Tuesday, April 28. This came after Gigi Hadid’s name trended on social media. Multiple reports confirmed that Hadid is expecting her first child with boyfriend Zayn Malik after five years of dating on-and-off.

That same night, James posted two TikTok videos. In both clips, the duo gave their rendition of Chris Brown’s “Yo (Excuse Me Miss)” in front of the other members of their quarantine crew. Meanwhile, James wore a black hooded sweatshirt and light gray shorts while he sang into a vodka bottle. Cameron playfully hugged his friend at one point. The guys appeared to be having a good time amid the coronavirus pandemic.

Tyler Cameron also took some time to put any rumors to rest. On Wednesday, April 29, he posted a live video of his morning workout on his Instagram Stories. After his sweaty session, Cameron read comments from some of his followers.

“Congrats on becoming the father. Gigi is preg,” one online troll wrote. The Season 15 star quickly shut down the speculation.

“Y’all are wrong in the comments,” Cameron remarked. “Y’all are terrible.”

In the background, one of his friends asked him what his followers were saying. He simply responded, “I’ll tell you later.”

This video comes after Cameron also denied that he was dating Hannah Brown. He insists that the two are just “good friends.” Brown and Cameron sparked the romance rumors when they were seen quarantining together at his home in Florida. Brown has since left the quarantine crew to isolate with her family in Alabama.

What does Tyler Cameron have to do with Gigi Hadid?

For those who don’t know, Cameron and Hadid first sparked the dating rumors back in August after they were seen together in New York. The couple reportedly dated for two months and ended their summer fling in the fall. It looked serious to fans since Hadid introduced Cameron to her family.

While Cameron kept quiet about their relationship, he referred to the supermodel as a “friend” and a “good girl.” The couple even unfollowed each other on Instagram following their split. But an insider revealed there was no “bad blood” between them. It turns out that they were better friends than lovers.

Back in December 2019, Hadid and Malik rekindled their on-and-off relationship. By early 2020, the beauty and the One Direction member confirmed they were back together in a series of Instagram posts. However, neither Hadid nor Malik have confirmed the pregnancy reports. An insider told Us Weekly that the Victoria’s Secret model has “always wanted to start a family” with the “Pillowtalk” singer, while a second source added that the two have “so much love for each other.”

Had the sweetest day celebrating my 25th birthday with my quarantine family, who made it so special for me, along with all the love I felt from all over the world! Thank you to everyone for the birthday messages, I carried you with me yesterday!! 💛🙏 I am grateful and lucky that my family and friends -near and far- are healthy and safe, and although I missed loved ones I wish I could have celebrated with, know that these times will make us even more grateful for togetherness to be had in the future ! I will never forget my 25th bday! +++The icing on the perfect quarantine bday was finding out my surprise everything-bagel-cake was made by the one and only Cake Boss @buddyvalastro who I have watched for over a decade. I CRIED REAL TEARS! BUDDY! This is a dream come true. I can’t believe you made this cake for me while the bakery is closed. It means more to me than you know, and when we hopefully meet some day you will truly know that there almost isn’t an episode I’ve missed. 10/10 would be a Carlo’s intern whenever needed. 😆 Grateful, honored, your biggest fan. 🥯🥯🥯🥯🍰

Do you follow Tyler Cameron or Matt James on social media? Sound off below in the comments section.