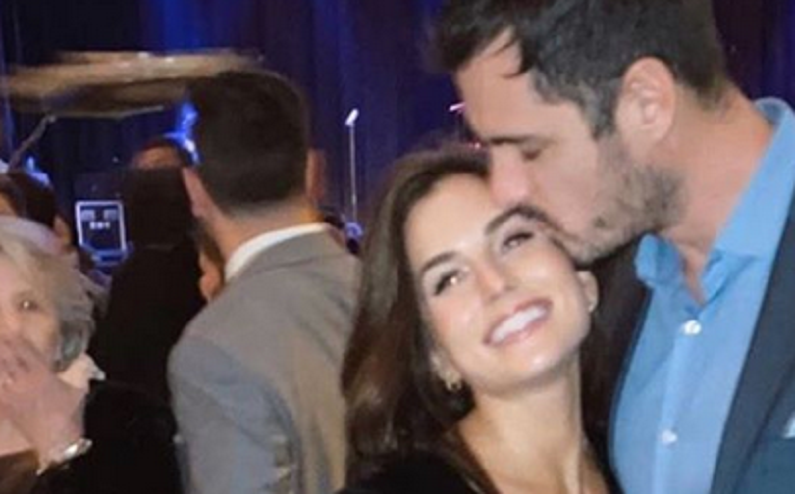 As TV Shows Ace reported, Ben Higgins revealed his intimate proposal to fiancée Jessica Clarke. The two want to delay physical intimacy until marriage. Now, Ben is defending he and his fiancée’s decision to wait. He said that he’s excited to wait, especially as they make their wedding plans.

The Bachelor alum and his beautiful fiancée have been sleeping in separate beds. The couple is staying with Clarke’s parents amid the COVID-19 outbreak. Since the couple dated long distance, they got used to not being intimate with each other.

Regardless, they still feel that this pandemic has brought them closer together. They just don’t feel the need to take that next step in their relationship right now.

Ben Higgins defends his decision to wait until marriage

Ben Higgins and Jessica Clarke are happy about their decision. The couple faced some eye-rolling and side-eyeing from their fans after revealing their intimacy plans. Higgins spoke to Ashley Iaconetti on the Monday, April 27 episode of their “Almost Famous” podcast.

“We are excited about this decision,” Ben Higgins said, as quoted by Us Weekly. “It’s been the healthiest decision for us.”

The Bachelor previously told Nick Viall on Wednesday, April 22 on his “Viall Files” podcast that he and Clarke were sleeping in separate beds while quarantining with her family. He revealed that it added a level of “respect” to their relationship. He also said that they have “definitely” not been intimate with each other and want to wait until marriage to do so.

Higgins noticed that fans are “confused” by the couple’s stance, but “it’s the decision we made that we thought was best for us as a couple to allow the healthiest relationship.”

While he understands the personal decision isn’t for everyone, it’s working for him and his bride-to-be. Higgins and Clarke feel that it’s improved their relationship. As for when they will walk down the aisle, their plans are on hold due to the coronavirus pandemic. Higgins said there are a “select few months” that they will choose to get married. They want to choose the right date, so both of their families can attend.

The Bachelor: Winter Games alum admits that he has a jealous streak

Ben Higgins is dishing more about his engagement to Clarke. Due to his latest podcasts and interviews, fans are learning a lot about him. He admitted that he got jealous when Hannah Brown expressed her faith in ways that he couldn’t on the show. Higgins wished he could’ve showed a different side to the Christian faith.

“I’ll be honest, I’m a little bit envious and jealous of this season because faith is such an important thing in my life. It is the reason why I am [who I am] today and a lot of the things I said and did don’t make sense without Jesus being at the center of it,” Higgins told Entertainment Tonight. “So, I’m a little bit saddened it wasn’t part of my story. I am jealous.”

Higgins has since worked on his jealousy. He told Viall that he’s aware of his jealous streak, and he knows acting on it isn’t healthy.

From my first date in life to the moments in between they all led me to getting down on one knee in front of you @jessclarke_ . This weekend I asked Jessica to give me the honor of being her partner for life. She said YES! I now officially have the most beautiful, kind hearted, supportive, well intentioned person to spend life with! Our adventurous ride through life together is just starting @jessclarke_ ! Let’s celebrate…but for now let’s stay home and isolate. Photo cred: @r_petey (ps: if you are wondering and feeling the need to be critical about us breaking isolation this was all done at her home in her back yard with the help of her family who we have been in the same house as “stuck” for over a week. There has been no contact with the outside world.)

“But I know my first response to envy now is try to find a way to get rid of it,” Higgins explained. “Because acting on it or pursuing it has never been healthy or helpful for me.”

Higgins told Viall that many fans see him as “perfect,” but he has his share of quirks. He feels that it’s important for others to see his flaws. He wants to live a more authentic life outside the Bachelor franchise. The reality star hopes that using his platform will allow fans to see him for who he is.

Ben Higgins and Jessica Clarke got engaged in March, after dating for over a year. Higgins and Clarke started dating in 2018 after he slid into her Instagram DMs.