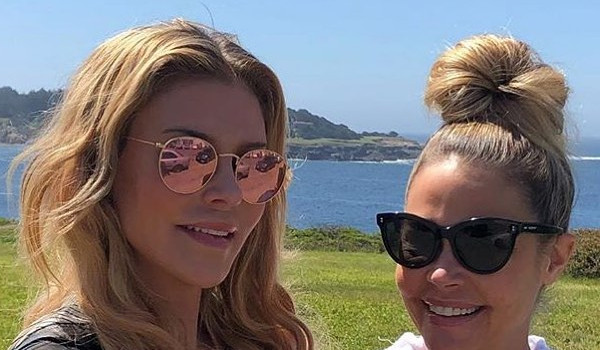 The Real Housewives of Beverly Hills Season 10 premiered on Wednesday, April 15. The ratings may have been down without Lisa Vanderpump, as Reality Blurb reports. However, one person was definitely watching: Brandi Glanville.

The former model and occasional RHOBH guest star live-tweeted during the episode. She also bantered with fans about her alleged intimate relationship with Denise Richards.

As TV Shows Ace reported, a mixed-up drink order sent Denise on a rampage against the waiter. Fans were outraged at her behavior. Brandi tweeted that Denise is a “b**ch” for the way she spoke to the waiter.

Im sorry but their is a way to say to your waiter (I've waited a lot of tables) that you think your drink might be wrong without being a complete bitch!!!. I judge people by the way they treat others

However, Brandi’s followers took the opportunity to fish for details about the on-going drama between the RHOBH co-stars. As fans know, Brandi alleges that she had an affair with the Wild Things actress, believing Denise to have an open marriage.

Several other RHOBH stars, including Erika Jayne, insist that the Denise/Brandi drama will air later in the season. But Bravo editors had a different idea. They went all in on the situation during the last few minutes of the Season 10 premiere.

If Denise is Such a B**ch, Why Did Brandi Hook Up With Her, Fan Asks

One fan called Brandi out for her derogatory tweet about Denise. The fan asked why Brandi allegedly became lovers with Denise if she didn’t like her attitude? The fan advised her not to “backtrack” on her love for Denise.

Brandi responded that the fan will “understand” after everything plays out on RHOBH.

According to Brandi, the fact that Denise stopped filming is a sign of her guilt. Another fan posted a screengrab of a newspaper headline about the actress refusing to film. The fan asked Brandi to “spill the tea.”

Instead, the RHOBH alum wrote back that Denise spilled the tea herself by stopping filming.

Is the RHOBH Star ‘In Love’ With Denise?

Another follower replied to the conversation by implying that Brandi “pretended to be in love” with Denise to get a storyline on RHOBH. Brandi immediately clapped back by saying the only people she loves are her two children.

The RHOBH star also points out that she never said or implied that she was in love with her former friend.

Im not in love with anyone but my 2 children. I was never in love with Denise I never said that or implied that.

That was the end of the conversation. When a fan tried to find out if Denise was “good in bed,” Brandi shut it down. She wrote that she has a legal gag order that prevents her from commenting further.

I have been sent a legal STFU

Tell us in the comments if you think Brandi has feelings for Denise. Did you enjoy the RHOBH premiere or are you missing Lisa Vanderpump?

The Real Housewives of Beverly Hills airs every Wednesday on Bravo.