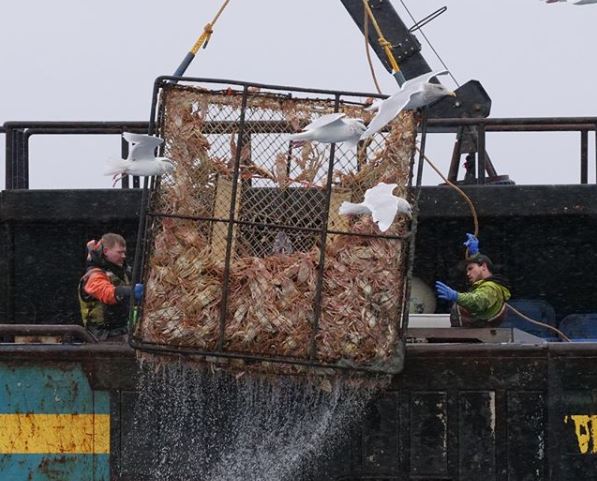 Deadliest Catch is back for another season this Tuesday night on Discovery. If you have ever wondered what it was like to go out on one of these boats, a reporter recently did it and shared the details. Kate Hahn with St. Louis Post-Dispatch shared the details of her experience.

Kate Hahn got the chance to go ou ton a boat and now she is sharing how it went for her. They didn’t film what she did, though. Kate was only out there for one day, but it was enough to get a taste of what it would be like if she was on Deadliest Catch.

Hold on for your life! The saga continues for the F/V Saga. 🌊 All-new #DeadliestCatch tonight at 9p on Discovery GO.

Kate shared that her job was “hooking bait bags inside the 875-pound steel-framed crab pots that are dropped one at a time into the churning sea.” Of course, this isn’t something that anyone is used to doing. Sig was even telling her things like “time is money.” Kate admits that she was sore already just after doing the first job.

Time for a new season of Deadliest Catch

The new season of Deadliest Catch will start airing this week. There are repeats and specials on this weekend as well if you are looking for something to keep you busy.

Captain Jake Anderson will be in charge of The Saga this year. Bering Sea legend Johnathan Hillstrand is also back again this season. Captain Scott Campbell Jr. returns as well.

Here is some of what Discovery shared about this season in their press release.

“This year, the Russians are taking an unprecedented move by revamping their crab quota system, and in turn, cutting down on illegal fishing. Now, the price of King Crab is slated to skyrocket, igniting the most cut-throat season yet. The quicker the captains can catch their crab and return to dock, the more money they can make. Everyone is vying for an edge – luring back some of the fleet’s most legendary faces. But just how hard can they push before things get deadly?”

This new season will be partially focused on how the Russians are also out there trying to do their job as well. These two will take on each other in this season. It will also show a few new alliances. You do not want to miss how it all goes down.

Don’t miss new episodes of Deadliest Catch on Tuesdays on Discovery. The big premiere will be two-hours long.

‘Jealous’ Kendall Jenner Reveals Stormi Is Trying To Steal Her Man Devin
‘BIP’ Natasha Parker Is Moving On, Saying Goodbye To The Past
‘Station 19’: Season 5 Release Date, What To Expect
Wait, Who Was Kim Kardashian’s Met Gala Date?
Lifetime’s ‘My Husband’s Secret Brother’ Is a Joey Lawrence Family Affair