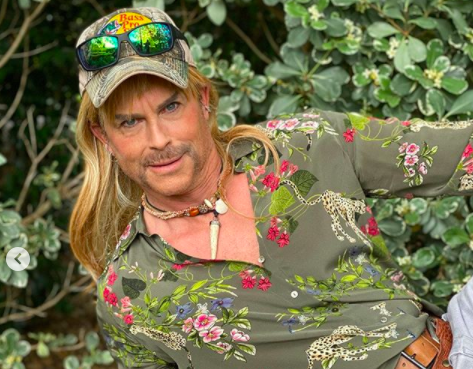 If you have not seen Tiger King, you better make it first on your list! Quarantine 2020 is all about the murder, mayhem, and madness of the big cat world. Even celebrities are getting inspired by the series!

Rob Lowe and Ryan Murphy – “developing our own version”

Rob Lowe recently took to Instagram to reveal that he and Ryan Murphy would be “developing our version of this insane story,” Murphy is the creator of American Horror Story.

Additionally, People confirmed that the pair are discussing the idea.

Lowe’s Instagram post included a photo of himself dressed up as the star of Tiger King. He rocked a blonde wig and cheetah shirt in the hype post. The post read, “Rob Exotic. UPDATE: Ryan Murphy and I will be developing our version of this insane story. Stay tuned!”

Rob Exotic. UPDATE: Ryan Murphy and I will be developing our version of this insane story. Stay tuned!

Fans reacted with great positivity to the post. Excited comments flooded in about the idea of Lowe and Murphy’s version. As a result, some of those comments were from fellow celebrities.

First of all, Chris Pratt commented, “Oh YES!!” Next, his wife, Katherine Schwarzenegger, commented “Oh no.” Then her own mother Maria Shriver commented, “Are you serious.” Lastly, Gwyneth Paltrow simply said, “INCREDIBLE.”

What is Tiger King?

Tiger King: Murder, Mayhem and Madness is an extraordinarily unique docuseries by Eric Goode and Rebecca Chaiklin. Furthermore, the episodes look at the life and the crimes of Joe Maldonado-Passage. He is a so-called country musician, zookeeper, gun enthusiast, and big-cat owner. He is known as Joe Exotic from Oklahoma.

Joe owned an exotic animal park. He claimed to have the largest number of big cats in the United States. Through many twists and turns, he finally found himself in prison in 2019. His arrest is due to paying a hitman $3,000 to kill Carole Baskin. He considered her his biggest rival.

Currently, Joe is in the Grady County Jail in Oklahoma. He was found guilty not only for the hitman but for killing his own tigers to make room for more.

Tiger King has inspired many in Hollywood

Murphy and Lowe’s possible adaptation of the Netflix show isn’t the only Tiger King content in the works.

Tiger King: Murder, Mayhem and Madness is available now to stream on Netflix. Let us know what you think of the series in the comments below!