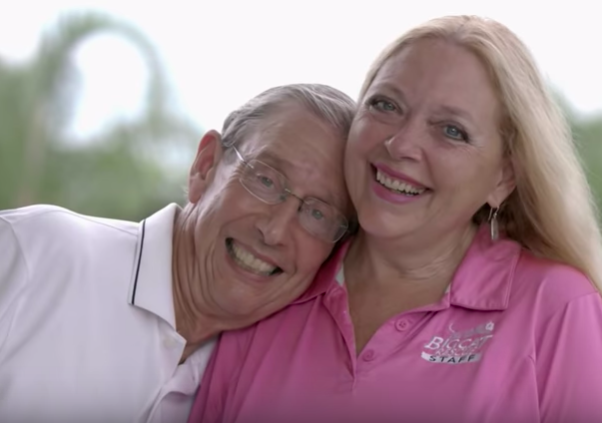 According to People, Tiger King focuses on the long-standing rivalry between Carole and Joseph Maldonado-Passage (also called Joe Exotic). She runs an exotic big-cat sanctuary in Florida and he is the founder of an exotic animal park in Oklahoma. Joe is currently in prison.

Carole was not afraid to be a public critic of Joe because of how he bred his animals, killed some of his tigers, and sold baby lemurs for profit.

Tiger King shines a light into the extreme measures Joe took to try to silence Carole. He has even been convicted for paying a hitman to try to murder Baskin in November 2017.
The drama then continues past a big cat rivalry into Carole’s personal life.

Carole Baskin was once Carole Lewis

In the 90s Carole was married to self-made millionaire Don Lewis. The pair turned 40 acres in Tampa into Wildlife on Easy Street, a sanctuary for exotic cats. It was extremely clear that Carole has so much love and passion for her cats.
In August 1997, Don disappeared without a trace right after the couple decided to divorce. This strange disappearance left Don’s relatives questioning whether Carole may have been involved. Some even went as far as to wonder if she fed his remains to her tigers. Whoa, call me shocked! I did not see that one coming!

But to this very day, Don’s disappearance is still unsolved. I seriously hope those poor tigers didn’t eat their dad!

The oldest of Don’s children told People in 1998, “It’s a perfect scenario to dispose of someone.” She continued, “We were upset that the cops didn’t test the DNA on the meat grinder.”

Carole responded saying, “My tigers eat meat; they don’t eat people. There would be bones and remains of my husband out there. I’m amazed that people would even think such a thing.”

Carole still doesn’t know what happened to Don. But, she suspects that he may have staged his own disappearance.

Now, that’s what I call crazy. I can not even imagine having people think I ground up my own husband and then fed him to my beloved rescue cats! At the same time, I cannot help but wonder how one woman is surrounded by so much drama for over 10 years. How does one go from being accused of murder in the 90s to having someone attempt to murder you in 2017?

Is Joe Exoctic as terrible as they say? Did Carole kill her husband? Let us know your thoughts about Tiger King in the comments below!