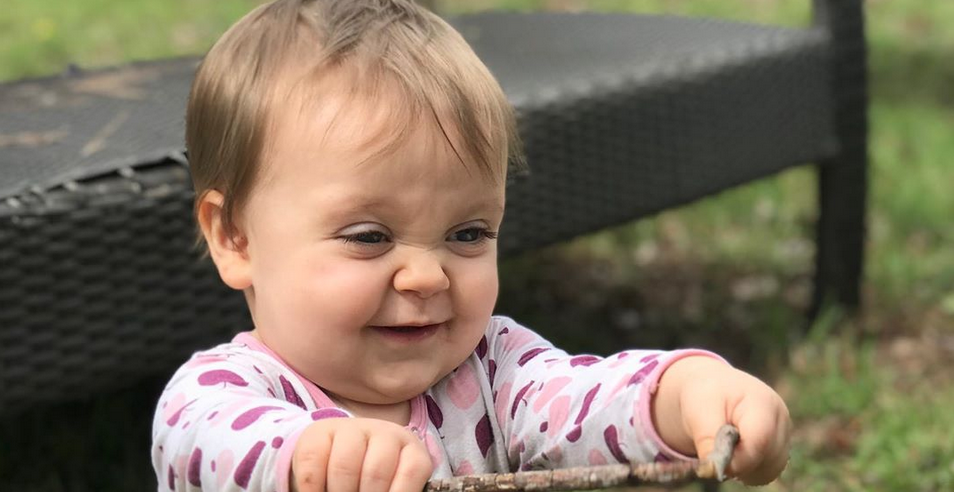 Duggar fans are loving seeing Ben and Jessa Seewald’s kids grow up. Even though TLC isn’t airing new episodes of Counting On, the family shares frequent updates on social media. Whenever fans see new pictures and videos of the Seewald kids, they gush over them.

Ben and Jessa have three kids, Spurgeon, 4, Henry, 3, and Ivy, 10 months. The family seems to be very active and busy, as expected. But, due to the coronavirus, they’ve been staying home and slowing down. While at home, they’ve gotten several new pieces of playground equipment. So, they have been enjoying lots of time in the backyard. While staying at home, they’ve posted on social media to keep fans updated. And, these posts bring a little bit of positivity during these uncertain times.

As Ivy grows, Jessa likes to share about the things she’s into. The Duggar granddaughter now loves playing peek-a-boo with a hat. In a new video Jessa shared Wednesday, Ivy is playing that new favorite game. And, she’s smiling as she lowers the hat over her head. She’s clearly loving the attention from her big brothers and parents.

The game that never gets old. 🧒🏻 Hard to say who’s more entertained— us or her! 💞 . One thing’s for certain: She’s got the whole family wrapped around her finger.

Jessa writes, “The game that never gets old. 🧒🏻 Hard to say who’s more entertained— us or her! 💞” Then, she adds, “One thing’s for certain: She’s got the whole family wrapped around her finger.” In the background, you can hear Spurgeon and Henry enjoying watching Ivy play this new game too. They’re joining in and saying “peek-a-boo.”

In early March, Jessa also shared a cute video of Ivy laughing at her big brother Henry. In the video, Ivy is laughing nonstop as Henry plays with a pacifier. As Jessa mentions, Ivy is easy to keep entertained.

Duggar fans are gushing over the new video of Ivy. They think she’s adorable and like she’s such a happy baby. Jessa previously shared that Ivy is an easygoing baby. She said that Ivy’s “so easygoing. She’s a happy baby!”

Jessa’s followers really seem to appreciate the happy video during these times. Even a short video of a child laughing and playing can make someone’s day. Fortunately, Jessa seems to be sharing regular posts on Instagram. And, most of those are of her kids. So, there’s a lot more positivity and cuteness to come.

So, what do you think of Ivy’s new game? Did you watch the video? Share your thoughts in the comments below.