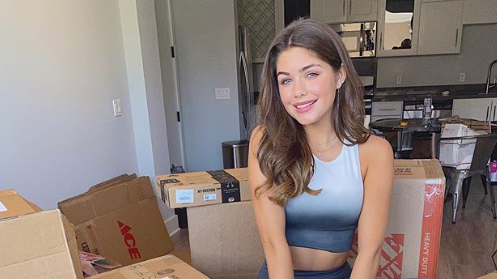 The girls of Peter Weber’s season of The Bachelor are sticking together it would seem. Both Madison Prewett and Hannah Ann Sluss went through the ringer with the indecisive lead. As fans know he chose and proposed to Hannah Ann Sluss while still in love with Madison.

Once that was unveiled, his mother launched the least classiest attack on Madison. Fans thought both girls deserved better. Each of them are rumored to have been moving on before isolation put them both at home practicing social distancing. In an Instagram Live the two talked about how their faith is keeping them sane during all the chaos.

According to People Hannah Ann Sluss and Madison Prewett went live on Instagram to have a laid back conversation. They talked about making a Tik Tok video together involving their mom’s cooking skills. They were joking.

Still they did bond over Madison’s dad when she told Hannah Ann he wanted to hang out with her dad. Hannah replied, “Coach Prewett,” and Madison repeated it with the same level of enthusiasm, “Coach Prewett, Ranger Rick.” Instagram account Spilltheroses shared the video and said, “two queens who deserved better this season. Peters loss.”

They’ve Both Leaned Heavily On Their Faith During This Time

Madison Prewett kept it honest with her religion and very committed to her faith during her run on The Bachelor. Her and Hannah Ann Sluss talked about how they are both really relying on their faith. Madison said, “I know a lot of people have been struggling. In this time it’s important to lean on people and what’s important. For me, my faith, and for you, your faith.”

Hannah Ann said, “I know we have always connected with our faith. It’s about trusting God and having him as your foundation,” she said referring to a bracelet she wears engraved with Psalm 62:5. Hannah Ann said in a previous interview watching the show helped her move on.

She said, “I was able to watch my ex-fiancé not only make out with every girl, but see him just mislead me and betray me. And that alone kind of gave me the closure that I needed.” Madison seems to have moved on from the ordeal as well as both girls looked beautiful and happy in the Live video. Fans will keep watching for the day they get their happy ending.

Is Natasha Parker Open To Being ‘The Bachelorette’ After ‘BIP’ Drama?
‘RHONJ’: Teresa Giudice Fans Shocked After Seeing Her 12-Year-old Daughter’s TikTok
‘Real Housewives’ Star Continues To Be Dogged By ‘Cult Leader’ Claims
Are Dean Unglert & Caelynn Miller-Keyes Finally Getting Married?
Farrah Abraham Shares Cryptic Quote, Reveals Being Ready To ‘Release Negative Thoughts’ Of Her Past