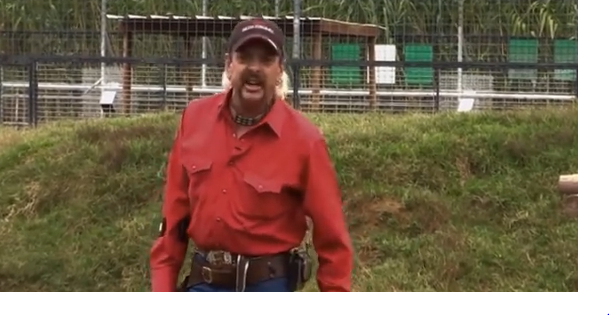 Joseph Maldonado-Passage, star of the popular documentary, Tiger King is in isolation due to the Coronavirus in prison. Currently serving time for murder for hire and animal cruelty, Passage has reportedly been moved into isolation. His third husband Dillon Passage spoke to Andy Cohen on his radio show.

Was Joe good to his cats? #netflix #tigerking

Why Is Joseph Maldonado-Passage In Isolation?

Joseph Maldonado-Passage’s husband Dillon spoke to Andy Cohen about the former zoo owner. He said, “we speak like three to five times every day, but since he moved to this new facility, they put him on a COVID-19 isolation.” Inmates in his previous jail had cases of COVID

Dillon has remained by Joseph’s side while he’s spent time in prison according to Fox Business. He said he believes he is in his own isolation quarantine within the prison. Dillon Passage said, “I do love Joe. He’s been with my through my darkest times, and I’m not going to just dip out and abandon him when he needs me most.”

Joseph Maldonado-Passage and his zoo have fascinated America during this unforeseen time where people find themselves looking for an escape. Joe Exotic memes have been the norm on most social media lately and it’s been a huge topic of conversation. The show has everything from animal attacks to a campaign for president to country music videos. All that is just Joe’s story there are plenty of other characters to follow along with. In addition there’s missing husbands, court cases, betrayal, arson. drug use, and polygamy.

Dillon Passage said Joe has not seen the documentary yet. He said he’d very excited to see it. There is now a large petition created for Donald Trump to free Joe Exotic from prison. As a lot of people reviewing the show have said no one is really innocent.

Joe Exotic Is Suing From Jail

Joe is seeking up to ninety four million in damages from former partner Jeff Lowe, the U.S. Department of Interior, and the U.S. Fish and Wildlife Service. He also said that he was the victim of entrapment from his business partners and the government.

Among other claims about Jeff Lowe, Joe said he, “changed my medicine with illegal drugs, stole my animals under fraudulent reasons.” It seems Joe is in quarantine just as a precaution. Fans hope their Tiger King  stays healthy and safe during a time when inmates are vulnerable.