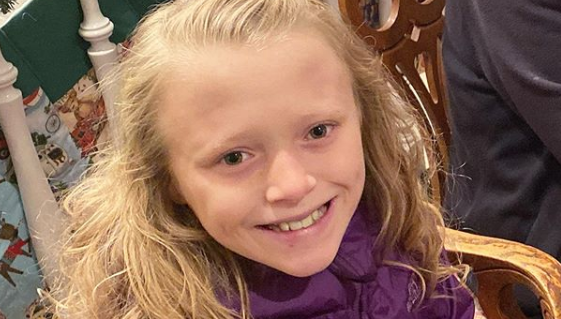 Josie Duggar is doing what she can to keep entertained during the coronavirus pandemic spreading across the U.S. For her, this includes some creative baking.

In an effort to keep entertained, Josie Duggar got creative with her baking. Shared on the official Duggar family Instagram, Josie constructed two different people out of dough. The snap featured a tray with the two cookie people on display at the bottom of the frame. Josie stood behind the baking sheet with a smile on her face. She gazed directly toward the camera.

The post revealed baking was a popular activity in the Duggar household right now.

Noticeably, one of Josie’s people cookies looked a little more like a dog person. It appeared to have long, hanging ears down each side of its face.

In a thread on the Duggar Snark subreddit, however, some are concerned. They are concerned that Josie Duggar looks a little unwell in the snapshot. Is she sick?

Doing some baking around here while we are social distancing! Josie got creative and made some people out of her dough! 👫☺️🥖 . We know that this Coronavirus situation is unprecedented. Beyond the health threat, there are so many unknown economic and societal impacts this virus is making worldwide. The one thing we do know is that even in the darkest days and in the most challenging times, we can put our trust and hope in God. Let's all pray for one another, for our leaders, for our healthcare workers, and especially for our elderly. Let's all look for ways to love and care for our neighbors with the greatest risk. #praying #trustGod #helpothers

Based on the conversation in the thread, Duggar followers had a lot of concerns. For starters, they didn’t care for the color of her skin. Why is she so pale? Some speculated she looked like she was suffering from the stomach flu.

“I work with kids her age. She looks so sick and fragile compared to other girls her age. Think about her nieces…” One individual penned in the thread.

Many were concerned she didn’t look as healthy as the rest of the kids in her family around the same age.

Some individuals clarified looking ‘sickly’ was normal for premature children.

A few individuals noted it was common for those born premature to look unwell until they hit puberty. These same individuals, however, questioned how strong Josie Duggar’s immune system was. They hoped Michelle and Jim Bob were doing their part to protect her from the virus.

“Sometimes premature born kids look sickly until puberty, and I hope they are taking the virus seriously because I doubt her immune system is as developed as it should be.”

Another individual chimed in that perhaps her “sickly” appearance was one of her “glitches.”

Overall, Reddit users seemed genuinely concerned that Josie Duggar was unwell. Many hoped Michelle and Jim Bob were keeping up with her medical care and monitoring her health.

The real question is… Do you think Josie Duggar looks unwell?