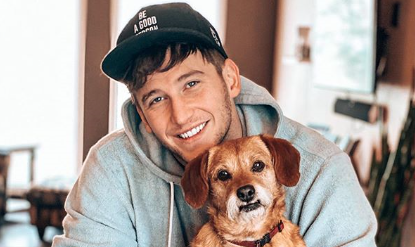 Blake Horstmann has been really honest on Instagram as of late. Perhaps quarantine has him thinking. He did a Q and A with fans, and didn’t leave out anything. He talked about Hannah G and Bachelor producers.

One question was, “why did you take Tayisha on a date first instead of Hannah G?” Horstmann said he was going to take Hannah G and he left his interview saying that was the plan. According to Blake three Bachelor in Paradise producers sat him down and convinced him it was better to take Tayisha. He said he made the choice thinking they were giving him good advice, but later he realized he’d been bullied.

As the 2 night finale comes and goes tonight and tomorrow, let’s not forget one important and simple concept…#beagoodperson #thebachelor #itsjustashowrelax

Blake Horstmann Says They Didn’t Want Him To Be Happy

Blake Horstmann said he felt like the producers had his best interest at heart according to Cosmo, when they told him not to take Hannah on the first date. He says he was wrong, “they didn’t want me to be happy with Hannah because that would have ruined their plans for the season.”

He went on to say the producers told him he had a lot of responsibility with the first date card. Blake stated they told him, “if I chose the person everyone thinks I should nobody will take the risks. I would ruin the experience for other people.” Blake said it all worked out because Hannah and Dylan are perfect together. A fan asked him if he would go back on BIP and try to find love again. Horstmann replied he still had, “pretty bad PTSD.” He said it was, “hard for him to trust anyone let alone producers.”

As For Those Texts With Caelynn Miller-Keyes

Blake Horstmann also got the question, “do you regret releasing the Caelynn Miller-Keyes texts to the world?” He said, “I don’t regret it and will never apologize for defending myself against lies.” He said previously, according to Life and Style, he released them because if he would have told anyone she came onto him, no one would have believed him.  Blake and Caelynn hooked up at Stage Coach where he also hooked up with Kristina Schulman. Reportedly the hookups happened on consecutive nights. Then they all ended up in paradise together.

The texts he leaked showed intimate messages between the two of them that proved it. Despite deleting them two hours later, a lot of people saw them. Caelynn maintained his leak didn’t show the full story. Blake had joked he was going to be more careful at Stage Coach 2020 according according to People. He even said, Kristina was going to hang out with him as a friend. Of course, now with the Coronavirus it remains to be seen if the festival will still happen.