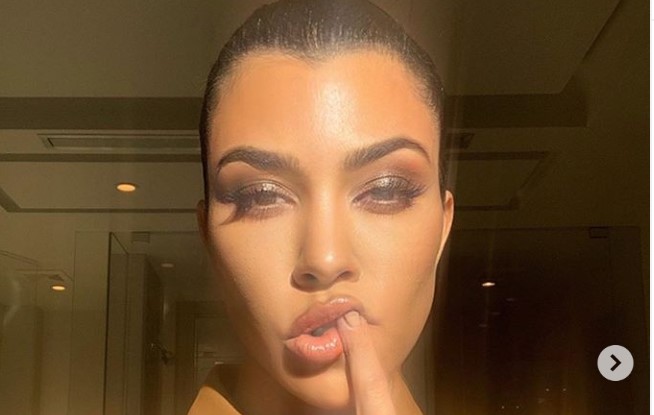 Things got physical between two of the Kardashian sisters according to a new upcoming clip for Season 18. In the last season, fans were left wondering whether Kourtney Kardashian would return to KUWTK. They decided to fight it out and see who would come out on top.

Khloe and Kim were feeling with Kourtney being indecisive, they were having to step up and do more filming and come up with more content for the show. Kourtney was just out living her best life and being a mom.

RI: What will you never apologize for? KK: Kissing my kids on the lips. The rest of my go-see interview on roseinc.com 🌹

Khloe Tries To Keep The Peace For Kourtney Kardashian

Season 18 teased that Khloe Kardashian must step in between Kourtney and Kim. Kourtney Kardashian said,“I will f—you up, you literal f-ing c— ” and proceeds to throw boxed water at her. Kris Jenner the main matriarch of the family told Ellen, “besides fighting in high school the girls never act like this.”

In the clip both girls are fighting, throwing punches, and kicking each other like two children. Once Khloe steps in to split the two apart Kourtney Kardashian slaps Kim across the face hard. Kourtney says, “just get the f—out of here,” where Kim responds “I don’t even want to see your f-ing face.”

The Book of Kardashian-Jenner

Khloe dramatically starts her interview with “once upon a time,” and continues her story, telling how her mom Kris is the queen and her and her sisters are all princesses. They have grown up in this kingdom and are all passionate about different things. The more successful and stronger they become the more burdens they have. Khloe teases if you want to know what happens? “Well honey you have got to stay tuned.”

According to People, Season 18 brings more storylines that show Khloe’s best friend Malika Haqq and how she’s dealing with her pregnancy. They will be showing Kendall and Kylie Jenner’s collaboration for Kylie Cosmetics. Scott Disick teams up with Khloe Kardashian for a big new prank because they both love doing that.

The new season will be filled with a lot of drama, name-calling, fighting and forgiveness. Maybe not all necessarily in that order. It does look like Kourtney Kardashian continued filming.

Therefore, seems to still be deciding whether that break from the show is what she is really wanting. You can tune in and watch Keeping Up With The Kardashians on Thursday at 8 pm on E!. Don’t miss the new season starting this week.