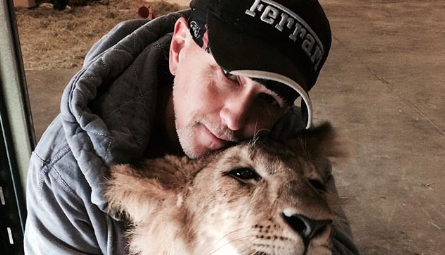 If there’s anyone who is responsible for the downfall of Joe Exotic, the Tiger King, it’s Jeff Lowe. He didn’t put the events into motion, but he did seem to be the final nail in the coffin. Not much is known about his past. During the documentary Jeff said he grew up around big cats because his grandfather owned a circus. He privately owned several before meeting Joe Exotic. In information that has been revealed since, fans learned Jeff worked as Robbie Knievel’s manager.

Dubbed the Godfather when he first came to the G.W. Zoo to buy a cub from Joe, he decided he wanted to be the one to save the zoo. He had a huge mansion and spent money on Joe and his husbands. Eventually after Joe filed for bankruptcy Jeff Lowe put the zoo in his name.

Jeff left the zoo for a little while after the death of Joe’s husband, because he said the owner went crazy. He moved to Vegas and started letting people party with the cubs and drove them to casinos. Jeff didn’t have the proper licenses to be able to have the animals that he did. The police seized them from him and fined him 10,000 dollars. Jeff also had a previous charge for domestic violence.

After Joe Exotic went to jail, Jeff Lowe took over according to The Cinemaholic. He bought the zoo in 2016 and renamed it from Garold Wayne to Greater Wynnewood, keeping the initials G.W. Exotic Animal Park. It had original been the memorial park in Joe’s brother’s name. Jeff worked with the federal investigators to take Joe down for a murder-for-hire plot. He’d finally decided to try and have Carol Baskin killed to keep her from causing trouble for him anymore.

What Does The Future Hold For The Zoo?

According to Marie Claire Jeff has broke ground on a new project named The Oklahoma Zoo. Lowe said, we think it’s best to let this zoo die with Joe’s conviction and not make the next generation of animals to live here forever suffer his outrageous behavior.”

Jeff Lowe wants to get away from Joe and his reputation. He says much more has been revealed about Joe and his treatment of the animals. The park is still open and can be visited but sources say they haven’t had as much traffic as they did in the beginning. That might change now that Tiger King has become such a successful series.