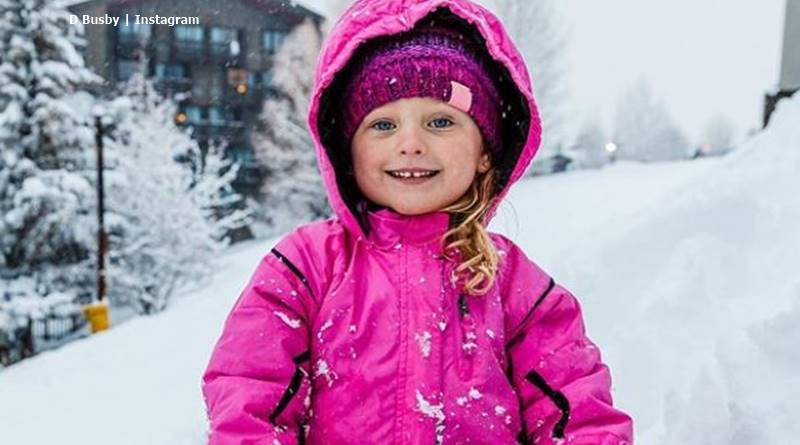 OutDaughtered fans heard that over the spring break, Adam and Danielle and the kids went to Jackson Hole for some fun in the snow. Excited, it was the first time even Danielle experienced real snow. Both the parents shared photos and stories about the kids enjoying themselves. But, all good things come to an end and the family makes their way home. Danielle worried about flights home, while Adam assured fans the kids were safe despite Coronavirus concerns.

TV Shows Ace reported that the Busby family went off to play in the snow during their spring break. Some fans chided them for traveling by air with kids. Actually, some of them were really concerned and still are. Naturally, with the Coronavirus around, they worried about Blayke and the quints hanging around airports. Well, Adam shared on Instagram that the kids were safe. He shared a photo of his daughter Riley. In his caption, he told fans of the TLC show they were isolated during their time away.

The OutDaughtered dad noted, “we have been away up in the mountains, but it was the best place to be. We were secluded and away and our kids still had a blast.” Lots of fans expressed how happy a time it seemed. One mentioned that being out in nature might be the best place to be right now. But, over on Danielle’s Instagram, she expressed her worries about flights and getting home.

As parents, this is the look that all of the money spent, time through airports and bundling up your kids in snow suits becomes worth it. A lot has changed in the world over this week that we have been away up in the mountains, but it was the best place to be. We were secluded and away and our kids still had a blast. #outdaughtered #itsabuzzworld.

On her Instagram, Danielle shared about how it finally snowed while they were in Denver. But, it just happened on the day they traveled home. In her post, she said there’s a disruption to their plans. She noted, “it snowed so much that [it] delayed multiple flights, canceled two flights and [left] us stuck at airport for 8 hours.” Danielle explained that meant they ended up in a “hotel for the night.”

The OutDaughtered mom worried about getting home on the next day’s flight. Then she said that Monday’s a problem. She feared they “won’t be able to fly any at all.” When one fan asked why Monday might became a problem, another fan pointed out, “not sure but I suspect if there hasn’t been already, there will be travel restrictions put into place because of the COVID19 virus.”

For those fans worried about the Busby family getting home, it doesn’t help that they never yet announced they got home safely. Plus, it’s nearly Monday morning in the USA right now. Adam shared his post 14 hours ago. Danielle shared hers some hours before that. Many fans hoped that domestic flights wouldn’t be hit by a travel ban. But CNN noted on March 15, that Donald Trump declared a National Emergency and they mull the idea of plane route closures. They wrote, “There are preliminary conversations about halting some air or train travel between some major US cities as a potential additional step going forward.”

Hopefully, fans of OutDaughtered get confirmation that the Busby family made it safely home to Texas. It’s not yet confirmed what, if any domestic routes, yet got canceled. What do you think? Did they get home safely? Will domestic flights get canceled in the National Emergency? Sound off your thoughts in the comments below.

Well…the one thing we missed on this Spring Break trip was seeing snow fall from the sky. Welp! We got it today…like 2 feet today…and it was on the one day we didn’t care to see it too much (lol) because it was travel day. Needless to say, the snow is absolutely beautiful but it snowed so much that is delayed multiple flights, canceled two flights and leaving us stuck at airport for 8 hours…so off to a hotel for the night and praying our flight tomorrow will get us home! (Especially because on Monday… we won’t be able to fly any at all 😐🙀) #itsabuzzworld #outdaughtered