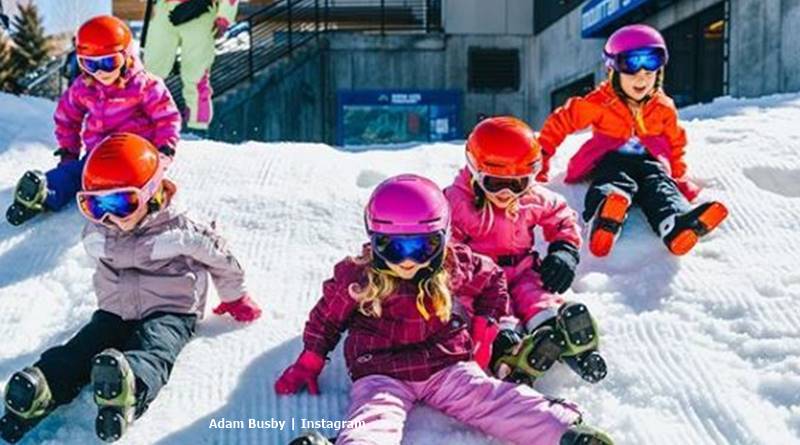 OutDaughtered fans saw the Busby family on their way to a spring break trip. Adam shared a photo of Danielle Busby and Riley taking a power nap during their layover in Denver, They were heading to Jackson Hole, Wyoming for their first outing in the snow. And, it looks like its a big hit with Danielle and the kids as she’s never played in the snow before either.

OutDaughtered family take spring break by flying out of Texas

TV Shows Ace reported that on their way their spring break vacation, Adam shared a photo of Danielle and Riley. It showed them getting in a power nap on the carpet. At the time, they waited for the next flight out of Denver en route to Jackson Hole. Many fans expressed their concern about flying and travel during the Coronavirus outbreak. But, it seemed they weighed up their options and decided on taking the trip.

Apparently, the snow trip really got the family excited. OutDaughtered mom, Danielle’s never played in the snow before. That might sound odd, but bear in mind her family lives in Texas. The mild climate seldom produces now. Mind you, ABC 13 notes that Houston gets snow sometimes. They reported that “since 1881, it…snowed 94 times.” That works out to about 1.3 times a year on average. That’s not a lot in over a hundred years. So Danielle shared how much she and the kids love their first snow trip.

I love getting to experience “first” with my girls…it’s a first tome for me to see snow but experiencing it with the fam all together is amazing! Blayke is loving the snow the most! This girl doesn’t want to come inside at all! 🤪 #springbreak #snow #jacksonhole #itsabuzzworld #busbyventures

Taking to Instagram, Danielle shared how much she loves the trip. She noted that Blayke, in particular, took to the adventure the quickest. She wrote, “I love getting to experience “firsts” with my girls.” Then the OutDaughtered mom mentioned that it’s actually a first for her as well. She thoroughly enjoys this experience with the family. Danielle added, “Blayke is loving the snow the most! This girl doesn’t want to come inside at all!”

Later, she also shared a video of one of the quints skiing no-hands down the learner slopes. But OutDaughtered dad Adam, later mentioned that Blayke picked it up so fast, she joined them later for a run on the slopes. Many fans reacted to the family outing and many of them were astounded that Danielle never played in the snow before. One fan said, “Crazy you have never seen snow! I’ve lived in Montana my entire life so I’m actually sick of winter! Jackson Hole is a great place to experience the winter vibes! Fun town!”

Many other fans hope that Adam Busby films the OutDaughtered vacation in the snow for his It’s A Buzz World YouTube channel. What do you think about Danielle Busby never playing in the snow before? Do you hope to see more of the kids enjoying their outing to Jackson Hole? Sound off your thoughts in the comment below.