When a show like Grey’s Anatomy loses one of its main characters, the talks about that show ending start to circulate. This is no different every time a star leaves the popular medical drama. Less than two weeks ago, Grey’s Anatomy said good-bye to Alex Karev (played by Justin Chambers) and the talks have started, yet again. Find out when Giacomo Gianniotti thinks Grey’s Anatomy could end?

When does Dr. DeLuca think Grey’s Anatomy will end?

According to an exclusive interview with US Weekly, Gianniotti says that the chances of the show ending at the end of season 17 are pretty good. Gianniotti said that the formula for the show is “really clear.” However,because the show addresses real-world situations there is never a shortage of topics for the writers. The writers could “write it forever,” he added.

Grey’s Anatomy is currently in its 16th season and was renewed for Season 17 in May 2019. Ellen Pompeo, who plays Meredith Grey in the series also renewed her contract for those two seasons. Could Pompeo’s two-year contract extension be a clue to the show’s demise? 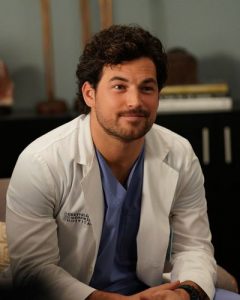 Gianniotti, who has played Dr. Andrew DeLuca since Season 11, says that he is unsure what is going to happen after Season 17. He added that to say “next year is the last year is stupid.”

I’m sure I’m not the only one who is looking forward to seeing where Andrew and Meredith’s love story goes. Especially now that it seems like Andrew is starting to really feel the effects of their relationship failing. If you missed last week’s episode of Grey’s Anatomy, it was a doozy and you missed a lot of vital information. Like who the father of Amelia’s baby is and how Jo is really feeling about Alex’s sudden disappearance.

Grey’s Anatomy became the longest-running prime-time medical drama last year when it surpassed NBC’s ER which ended after 15 seasons back in 2009.

Could the show’s longevity be its downfall?

Most television fans get sick of a show fairly quickly,whether it’s the stale storylines or a constantly changing cast. Grey’s Anatomy has had a number of key characters leave over the years. However, even after Patrick Dempsey, Katherine Heigl, and Sandra Oh left the show, they were able to keep the story going. Can the show still stay afloat after an original cast member, Justin Chambers, exit from the show? At this point, only time will tell. As a fan of the show, who hasn’t missed an episode since the premiere in 2005, I can only hope that they find a way.

‘You, Me, And My Ex’ Alex Hines STILL Defending Relationship With Caroline
Adam & Danielle Busby DRAGGED For Getting ANOTHER Designer Dog
’90 Day Fiance’ Loren Brovarnik Gives EXCITING Pregnancy Update
Would Michael Allio Accept An Offer To Be ‘The Bachelor’ Next Season?
‘Below Deck Med’: Is Lexi Wilson Engaged? Malia White Spills The Tea