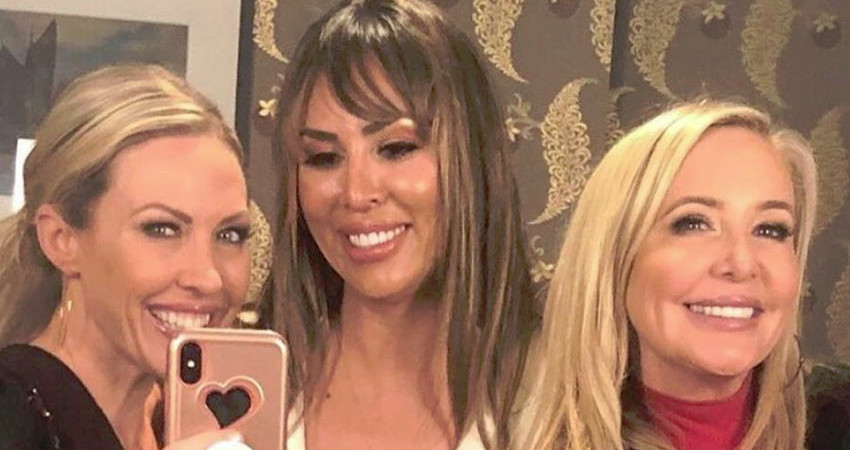 But it looks like Andy Cohen’s promises of a cast shake-up are true. Rumors have persisted for months that Kelly Dodd’s close friend, Elizabeth Vargas, is joining the show. Now a leaked video seems to confirm the news.

TV Shows Ace reports that aside from Vicki and Tamra, the other ladies from Season 14 are all returning. Fans can expect to see more of Kelly, Shannon Beador, Gina Kirshenheiter and Emily Simpson. Braunwyn Windham-Burke returns for her second season of RHOC.

Earlier this week, Instagram user bravohousewives posted footage of the Season 15 filming. In one shot, Kelly dances next to newcomer Elizabeth Vargas. Shannon and Braunwyn are also visible at different parts of the footage.

The ladies seem to be out at a bar or other event where they are dancing, drinking and chit-chatting.

Videos of the #RHOC ladies filming season 15! Newbie @elizabethlynvargas is spotted dancing next to Kelly! #RHOC 🍊

Who is Elizabeth Vargas?

No, not the former ABC news anchor. Reality Blurb reports that RHOC’s Elizabeth is the founder of a digital music service, Edge Music Network. She is also the CEO.

Reportedly, Elizabeth is close to Braunwyn and lives in Newport Beach, CA, where Kelly used to live. She is currently in the middle of a divorce from her husband, which is something that will play out on the show.

It doesn’t seem as though she has children, but she does have a gorgeous Siberian Husky.

We are on a roll animal lovers! We checked out a beautiful facility today to get some ideas of architecturally how we would build out the We Care Rescue Ranch! #nokillshelter #wecarerescueranch #animalshelter #animalrescue Every Heartbeat Counts 💙💙💙🐶🐶🐶🐕🐈🦜🐇🕊🐆🐅 @wecarerescueranch

At the end of January, David Beador announced his engagement to Lesley Cook, TV Shows Ace reported. Fans will recall that David is the ex-husband of RHOC’s Shannon. His cheating, their therapy sessions and eventual divorce all played out on camera.

Lesley often posts near-naked photos of David. She took the opportunity to raise awareness about the importance of hand-washing with another racy photo. A seemingly nude David has his back turned to the camera.

“Wash your hands like you’re washing David Beador,” the caption advises. The resounding response on social media was, “Ewwww.”

Bravo has yet to confirm whether Elizabeth is joining RHOC full-time or in a friend role. The Real Housewives of Orange County returns to Bravo later this year. Check back with TV Shows Ace for more news about the Real Housewives franchises.