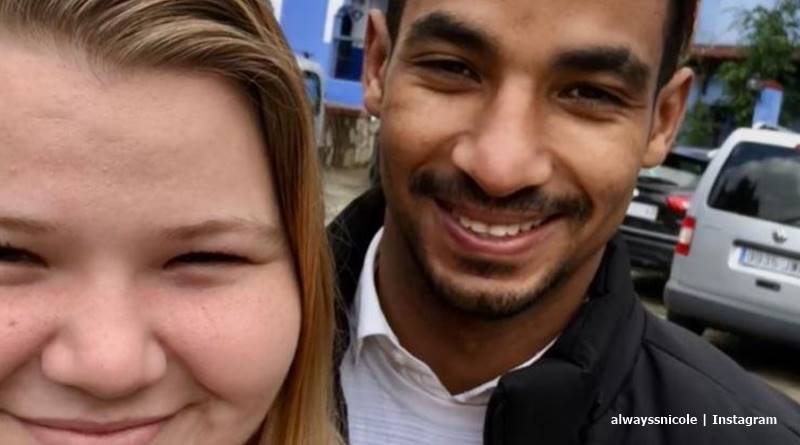 90 Day Fiance fans really believed that Nicole Nafziger lives in a fantasy world regarding Azan. She saw him a  few times in Morocco but he never came to the United States. Recently, she’s been reading a lot, and some fans wondered if she tried to pass the time until she saw him again. At one time, in February, she promised “big news” soon. Now, she says she’s in Morocco so that could be her big news. Nevertheless, fans of TLC still think she’s obsessed beyond reason.

TV Shows Ace reported that Nicole promised a surprise soon. At that time, some fans wondered if she’d been crying as there was a box of tissues and it looked like her eyes were puffy. She also started reading a lot. So, fans assumed she’s trying to “distract” herself from Azan. Now she works as a barista again, many fans thought any chance of her traveling to Morocco to see him would be beyond her budget.

However, she claims she’s with him now. Some fans still wonder if she shares old pics and tells fibs. However, those who follow the 90 Day Fiance veteran closely, noted she definitely said several times, that she’s with him. As rumors run wild that he married someone else, fans think she’s crazy for persisting in their relationship. Others slam her for probably still sending him money.

Well, if she’s planning on a wedding, she’s not saying much at all. And, fans wonder how she could marry him anyway, as he can’t return to the USA. So, maybe the “big news” is just that she went there. Nicole, who got termed the “9o Year Fiance,” seemingly persists in a dream where Azan marries her and becomes a real daddy to her daughter, May. Her loads of haters pitched up to troll on her as they usually do.

The photo she shared on Instagram showed her with Azan. She captioned it with, “So happy to finally be with my love again♥️.” Nicole’s got many loyal 90 Day Fiance fans who seemed very happy for her. But others started in on her again. One said, “he doesn’t deserve her! And this is coming from a moroccan woman born and raised in Morocco and now living in the States.”

So many people troll on Nicole. But, it’s easy to understand them being perplexed by her. After years of trying, Azan still never proposed. In fact, Cheatsheet reminds readers that Azan canceled the last trip where they’d be alone together, without explaining why. They can’t understand why a nice enough young woman doesn’t get on with finding someone closer to home to love. One said, “Stop sending him money and see if he will meet you at the airport.”

Then another 90 Day Fiance critic commented, “don’t see how you can be happy with a man that has made no efforts to be with you. You waste your money flying to Morocco for what? That money should be spent on taking care of your daughter. You really should re-evaluate your priorities in life. That man will NEVER marry you!”

And, if you still think it’s all just a story about being in Morocco, one 90 Day Fiance fan claimed they saw her on the flight. They noted, “She is definitely there. We flew the same plane for one of her flight segments.” However, another fan said, “we stay right here in Florida not far from her. She is not there believe me.”

So happy to finally be with my love again♥️

What do you think? Did Nicole really go to Morocco to stay with Azan? Or is she faking it and still back in Florida? Sound off your thoughts in the comments below.

Remember to check back with TV Shows Ace often for more news about Nicole, Azan, and TLC’s 90 Day Fiance.