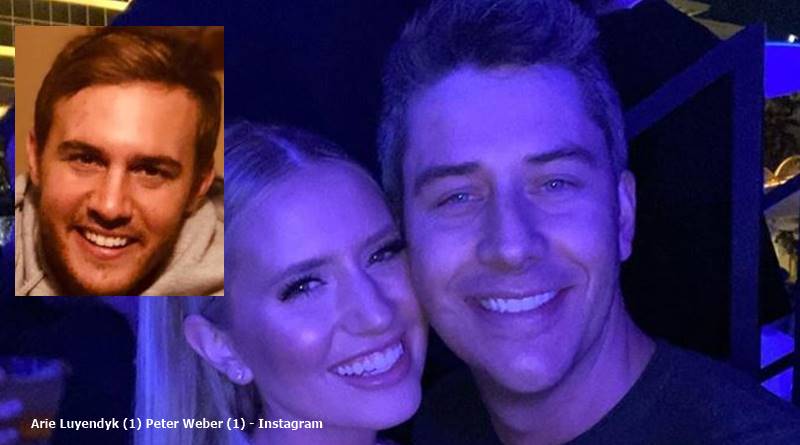 The Bachelor fans disappointed with the outcome of Peter Weber’s season should maybe chill a bit, according to Arie Luyendyk. Once one of the most hated The Bachelor leads, he too dumped his woman and went after his second choice. Now he’s married to his runner-up, Lauren Burnham, and has a cute baby girl. So, he gave Peter and his fans some advice.

On Tuesday night, fans saw that Peter Weber proposed to Hannah Ann Sluss, the woman his mother, Barbara, wanted for him. Previously, Madison dumped him but she really seemed to be the one he wanted. Actually, his mom came out very much against Madison. How much of her opinion influenced Peter, fans will probably never know. But, conflicted, he finally went after Madison. Right now, even he’s not sure if what they found together is actual love. But Arie Luyendyk knows exactly how he feels.

Last month, TV Shows Ace reported that after his very controversial season, Arie married his runner up. They celebrated their first wedding anniversary in January and seem extremely happy together. Since Arie, it seems the trend is to choose someone other than the finalist. Or, like Hannah Brown, ending up with nobody at all. Each of them went through agonizing moments weighing up the contestants on their plates. But, Arie’s proof that The Bachelor still brings compatible people together.

Arie Luyendyk spoke about Peter ahead of the finale reveal about Hannah Ann Sluss. He took to his Instagram mere hours before the finale and shared a photo of him and Lauren. He mentioned his own outcome and then wished Peter all the best. His caption read in part, “Hoping @pilot_pete finds his way despite what road it takes to get there.” While fans are there for entertainment, Arie noted that for The Bachelor, it’s a choice they make that affects “the rest of [their] life.”

Looking at the complicated end to Peter Weber’s season, Arie assured him that the hard path is certainly worth the risk. In fact, Arie noted, it’s “1000% worth the risk.” Then, he asked fans of The Bachelor not to pass “judgment” too quickly. As he noted, “So much more to this journey than the viewer sees.” Well, as fans now know, Peter declared his love for Hannah, saying he’s “100 percent certain,” Yahoo‘s article noted. But maybe he wasn’t in love with her.

2 years ago the morning after our dramatic finale before going on @goodmorningamerica. ❤️Hoping @pilot_pete finds his way despite what road it takes to get there. At the end of the day it’s a decision that leads to the rest of your life and however hard and complicated it’s 1000% worth the risk. Don’t know how this season ends but don’t be quick to pass judgment if it isn’t what you at home want or expect from it. So much more to this journey than the viewer sees. Can’t wait to see what happens!

As fans of the show know, Peter’s 100 percent all dissolved during his conflict with himself, and maybe his mom, and he went for Madison. What do you think? Did he make the right decision just like Arie Luyendyk? Sound off your thoughts in the comments below.

Chrishell Stause Vacations In Paradise With Her New Man — Who Is It?
Derek Hough Dishes On His Relationship With Hayley Erbert
‘LPBW’ Jackson Roloff Has What It Takes For His Own Show?
‘Counting Cars’ Is Back With More Sin City Restorations, Alice Cooper!
‘Y&R’ Spoilers: GAME OVER! Phyllis Blows Tara And Sally Up?