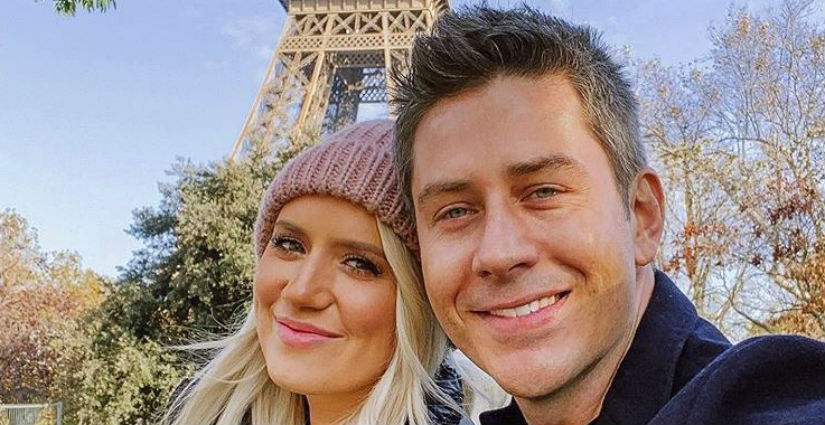 Former Bachelor Arie Luyendyk Jr. stunned fans when after he gave out his final rose to Becca Kufrin, he changed his mind. Arie couldn’t quit thinking about runner-up Lauren Burnham. Lauren took Arie back and the two were married January 12, 2019. The two welcomed their first child on May 29. Arie, Lauren and daughter Alessi are living the dream. Yesterday the couple celebrated their one year anniversary in a big, memorable way.

Arie was in for a huge surprise from Lauren to celebrate their one year wedding anniversary. She rented a white Lamborghini, dressed up Arie in a tux, all while sporting her gorgeous wedding gown. The two had a romantic dinner overlooking the city.

Arie went to Instagram to share a photo and heartfelt thanks to his wife for their special night. He also gave a shout out to the valet for taking their photo. Arie explained the date then said, “My wife sure knows how to plan a date. Thank you love, I’ll never forget tonight.”

Lauren also shared a photo on Instagram featuring the cute couple kissing on the hood of the Lamborghini. She said, “Surprised @ariejr w/ the getaway car we never got at our wedding and made him relive the day with me.💫.”

Tux and wedding dress on, rented a Lamborghini and had one incredible set up at a dinner overlooking the city. My wife sure knows how to plan a date. Thank you love, I’ll never forget tonight.

Along with special night, the couple shared sentiments on social media

Arie and Lauren shared sentimental thoughts and feelings along with photos from their wedding day on social media. Arie said, “Happy 1 year to us! How has it already been a year?! There’s a million things I could say on here but I’m going to save most of it for tonight. Just want to say I love you So. Much. and I’m so happy I can call you my wife. Thank you for being an amazing partner, mom and best friend. Cheers to us 🥂.”

Lauren also did not miss the opportunity to tell her husband and the world how much she loved him. She said, “Happy first anniversary to my best friend, my love and my partner in everything. I love you. This has been the best year of my life and we are just getting started. To us!🥂.”

Lauren and Arie are so in love

The love shared between Lauren and Arie is obvious to all who see them. They were definitely meant to spend this life together. In fact, the adorable couple is so in love they got married not once, but twice. While their official wedding took place in January 2019, Arie and Lauren tied the knot again in September.

During a trip to Vegas the couple renewed their vows to each other. The couple, along with their 3 month old daughter, got married then posed with a pink Cadillac. Elvis was of course in the photos, although he did not marry them.

Congrats to Lauren and Arie on their one year anniversary.