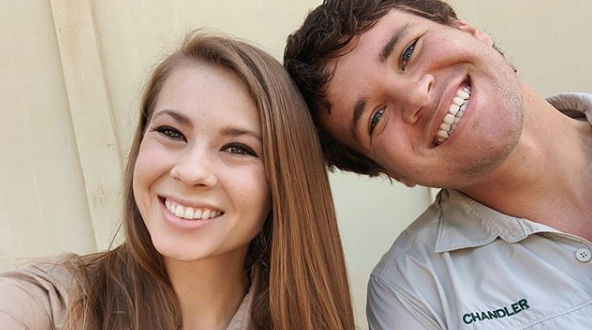 Coming up on 14 years since his passing, Bindi Irwin shared an emotional tribute to her late father, Steve Irwin on his birthday.

Bindi Irwin Lives The Way Her Dad Would Have

The 22-year-old dedicated a post to her late father, the “Crocodile Hunter” on Saturday. February 22nd, 2020 would have been his 58th birthday. Bindi posted a throwback photo from her childhood. She is seen laughing along with her father, who is holding a baby porcupine. The post was captioned with a tear-jerking message, she revealed she lived just as her father would have on that day had he been there.

Bindi’s loving caption went on explaining her day. She said she began the day with a strong cup of tea, just the way he liked it. She then hugged her mother, for her father as she said, and told her how much they all love her. Bindi and her brother, Robert Irwin took a hike through the mountains that their father cherished so much. She also shared some stories of her father with her fiancé, Chandler Powell as they watched a documentary of him. She finished the day with a walk through his office, smiling at their family photos. “Today and every day I miss you and love you beyond description. You’re always with me.” She ended the caption.

Dad, Today is your birthday. I had an extra strong cup of tea just how you liked it. I hugged Mum for you and told her how much we love her. Robert and I went on a hike through the mountains you cherished. I watched one of your documentaries with Chandler and shared stories about you. I walked through your office in the zoo and smiled at our old family photographs. Today and every day I miss you and love you beyond description. You’re always with me. ❤️

The Family Continues To Carry On Steve’s Legend

Steve’s wife, Terri Irwin, tweeted in remembrance of her late husband for his birthday. She tweeted out several photos of the star, captioning with heartache that she is determined to celebrate what he loved the most. Terri went on to describe how he was happiest when he was at the Australia Zoo with their children. She stated that he was her best friend, the best dad, and he had built the best zoo. She closed with the statement, “Family Always.”

Even Chandler Powell, Bindi’s fiancé sent a message out to Steve. He thanks Steve for the inspiration to love all wildlife, not only for him but for the whole world. He knows how proud Steve would be of his family who continue to carry on the amazing work he began years ago. Chandler assures Steve and others that they will continue to keep his message alive for generations to come.

According to The Blast, last year on Bindi Irwin’s 21st birthday, Chandler popped the question.

Steve Irwin passed away due to a sting in the chest from a stingray in September 2006. The Crocodile Hunter was filming a documentary series, “Ocean’s Deadliest.” At the scene of the incident, the crew began giving him CPR immediately while seeking help. Steve was only 44 years old.