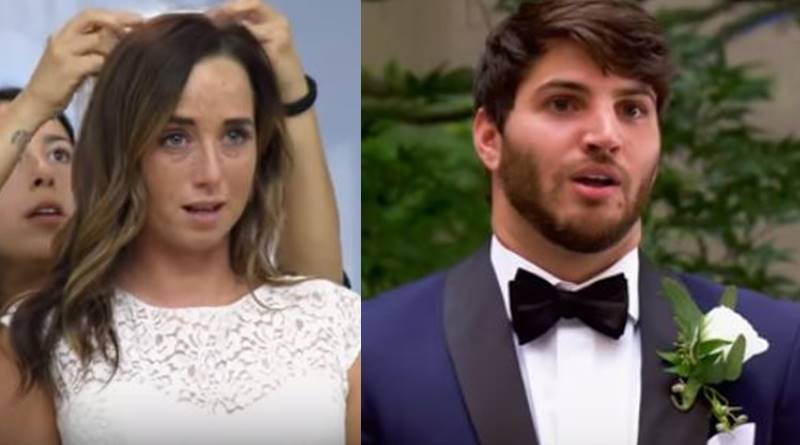 MAFS fans wondered for quite a long time if Derek and Katie Conrad would survive. Initially, they looked good together, with just a few minor issues. Derek traveled quite a bit, which seemed something they could work through. She has an ex hanging around, but on the whole, their chemistry seemed good. When cracks appeared fans wondered if they’d make it to Decision Day. Now, they wonder if they’ll make it to the Reunion. Note this article contains spoilers.

TV Shows Ace reported that Katie and Derek seemed to be fraying at the edges early on. After all, fans saw Derek use the word b***ch to describe Katie. Not a very promising start! Then, Katie’s ex suddenly started professing his love for her. Simultaneously, the couple started arguing a lot. Former stars watching them couldn’t really swear that they’d survive their marriage. These included Bobby Dodd and Danielle Bergman.

Cheatsheet reminds readers that their honeymoon was dreamy. The MAFS couple raved about the sparks and chemistry. But fans noted something seemed off. Talking to Pastor Cal Roberson, Derek seemed unable to commit to loving Katie. He said that in time he might fall in love with her but he needed more time. And then, almost as if in retaliation, Katie told the Pastor that she still had feelings for her ex.

Katie and Derek’s spoilers say they survive Decision Day, but not the Reunion

New spoilers came out via the Married At First Sight spoiler page on Instagram. @mafsfan popped up a story that came with two clips. The first one said, “Katie and Derek stay married on decision day.” But the second one noted,” but they are no longer together as of the reunion show.”

On the @mafsfan page, many fans commented on the spoilers that emerged. One noted, “I love the spoilers but man they break me a little. But don’t stop doing them 😂.” Another one commented, “I’m sad about this one 😭😩.” Meanwhile, another MAFS follower noted, “I knew Katie and Derek were over. She’s always hanging out with Taylor and Meka (and we already know those 2 didn’t stay married). They’re even in Hawaii together right now. I thought the ladies deserved so much better. All the guys have a lot of growing up to do.”

Check my Insta stories if you can’t wait to see the season play out! There are (allegedly 🤣) 17 episodes in this season. Tonight is Episode 7 so we have a lonnnnnng way to go.

What do you think about the spoilers for the Lifetime show suggesting that Katie and Derek don’t survive until the Reunion? Do you feel a bit sad? Or, did you expect their breakup to happen? Sound off your thoughts in the comments below.

Remember to check in with TV Shows Ace often for more spoilers and news about the cast of MAFS.

‘OutDaughtered’ Troll Questions Danielle’s Stress Levels About Her Heart
Kim Wonders If Kourtney Kardashian & Addison Rae Hooked Up
Khloe Kardashian Freaks Fans Out On Social Media
Colton Underwood DRAGGED For Coming Out & Here’s Why
Are Jenelle & David Eason In A Good Place With ‘Storms’ Behind Them?