Mother of Four Kim Kardashian West revealed that she believes her youngest son, Psalm is a spiritual incarnation of her late father, Robert Kardashian Sr.. The reality queen/ beauty entrepreneur recently shared intimate family details, explaining how Rob senior is still with them.

In an interview with pop-culture news outlet E!, Kim Kardashian told reporters that she was first told that her son would house her father’s soul before Psalm was even born. Kim and husband, Kanye West brought their youngest son into the world with the help of a surrogate. During the pregnancy – the pair were vacationing in Bali when Kim was approached by a blind medium. The stranger told her that her father would return in her son. The medium was a blind woman who had never interacted with Kim or her family. Reports state that she had no knowledge of the fact that Kim was pregnant via a surrogate. The woman proceeded to tell her that she would have a son and that he would be her ‘father reincarnated’.

In the interview, Kim Kardashian says that the interaction came out of the blue.  She reveals that not even her crew members knew of the surrogate pregnancy – it was still being kept under wraps.

Why She Says She Believes

According to People when Psalm was an infant, she had to be away from work and her nanny took the child with her to a baby-shower because Kim had to leave on a last-minute business trip. At the party, her nanny is approached by a woman asking that she tell the mother of the child that ‘this is a family member of hers reincarnate’

In addition, Kim says that Robert and Psalm share a lot of the same personality quirks and characteristics – like being left-handed for example. 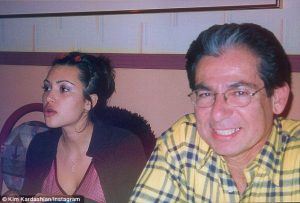 Kim Kardashian and Kanye have also noticed that their youngest seems to bring a calmness to their household that wasnt there before. According to a recent interview with E! Magazine, Psalm’s introduction to the family has helped bridge the gap between older siblings Saint and North. The famous mom reports that since Psalm’s arrival her two older children argue less and are getting along a lot better. “North and Saint are getting along, so that makes me happy,” she shared.

Kim’s family feels very strongly that it is true and says that it is a very emotional thing being able to still be so close to her dad even after his passing.

I don’t even know if I believe in reincarnation, but I do now. But I want to believe it!” She exclaimed to reporters.

Do you believe in reincarnation? What do you think about this latest Kim Kardashian news? Tell us in the comments! Be sure to check back in daily with us here at Tv Shows Ace to stay up to date on all things Kardashian.

‘Manifest’ Season 1 & 2 Drop Into The Netflix Library
‘1000-Lb. Sisters’ Rumor: Wait, What is Amy Halterman Retiring From?!
Whitney & Zach Bates: BIG News On Baby Jadon, How’s He Doing?
Kylie Jenner Is The Latest Kardashian Member To Have A Crazed Stalker
Candace Cameron Bure Shares She Censors Herself For The Kids