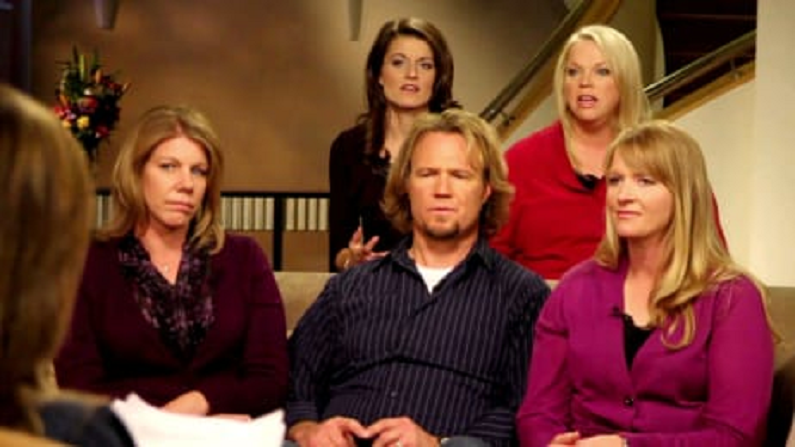 Sister Wives star Kody Brown brought up the possibility of divorce. It doesn’t mean that any of his wives are moving on anytime soon, but it could happen. Fans are speculating which of his wives would be the first to move on. It looks like there could be a few possibilities.

Kody Brown became polygamous for religious reasons. That doesn’t mean that his wives need to be polygamous forever. He has no problem with any of them “moving on” if they are no longer happy. This came as a shock to fans, especially when they claim to be about family first. But some fans feel that some wives would fight an out if they wanted to.

Kody has made it clear that he’s fine with the concept of divorce, or the reason to leave the family. Fans are now talking about who could leave first. As Showbiz CheatSheet reported, the most obvious answer is Meri Brown. Her relationship with the family has been strained for several years. Marriage counseling did little to help. Even fans noticed that Kody and his wives can’t stand being around her.

Meri has become the outsider of the family. Now that her daughter no longer lives at home, she is free to go wherever she pleases. Meri has an independent business that supports herself. She owns Lizzie Heritage Inn, a bed and breakfast in Utah that’s become successful without the help of her husband and sister wives. She could live closer to her child, but she’s decided to stick with the Brown family. She’s also not close to her sister wives and other children. So, it wouldn’t be a huge loss if she moved on.

Christine Brown says she loves living away from the family

Even though Christine is one of the strongest supporters of the family’s plural lifestyles, she seems to be comfortable with being on her own. As In Touch reported, she’s satisfied with being separated from her sister wives. She wasn’t sold on Kody’s big house plans. Christine doesn’t like the idea of seeing her family every morning.

During the Feb. 9 episode of Sister Wives, she explained why she’s against the idea of the entire family living together.

“Honestly, I’m a better Mom living separate [sic],” she tweeted. “I love my Sisterwives [sic] and I want to live next to them for the rest of my life. #SisterWives #tlc.”

Kody’s future plans to have everyone living together under roof isn’t going over well with Christine. She made it clear that she doesn’t like his big house plans. She hated it so much that it affected her diet.

“I stress ate SO MUCH after @realkodybrown presented the ‘One House.’ I loved our living arrangement in Vegas and I just don’t see why we’d mess with perfection. It. Was. Perfect,” she previously tweeted during another episode of Sister Wives.

However, it’s not clear if she would walk away from the family. Christine admitted her attraction to Kody and having a desire to be his third wife in the family’s book, Becoming Sister Wives.

Robyn is also okay with the idea of divorce

During that episode, Robyn was relieved that Kody brought up the topic of divorce. Since she has been divorced before, she knows what to expect. She’s glad that Kody respects his each of his wives’ needs to leave the family and live their own lives. But she also made it clear that she’s staying with Kody and the family. She feels the need to fulfill her role as the fourth wife.

What are your thoughts? Which wife would be the first to leave? Sound off below in the comments section.

Check back with TV Shows Ace for the latest news on the Sister Wives.

‘Days Of Our Lives’ Two Week Ahead Spoilers: Xander Goes Too Far With Dr. Synder – Sets Up Another Salem WhoDunnit
Brittany Cartwright Hits The Gym, Starts Postpartum Weight Loss Journey
‘The Young And The Restless’ Spoilers, June 11-14: Summer Needs To Watch Her Back
Are Kim Kardashian & Kanye West Mending Their Relationship?!
’Taken At Birth’: The Truth About Dr. Thomas J. Hicks & Stolen Babies