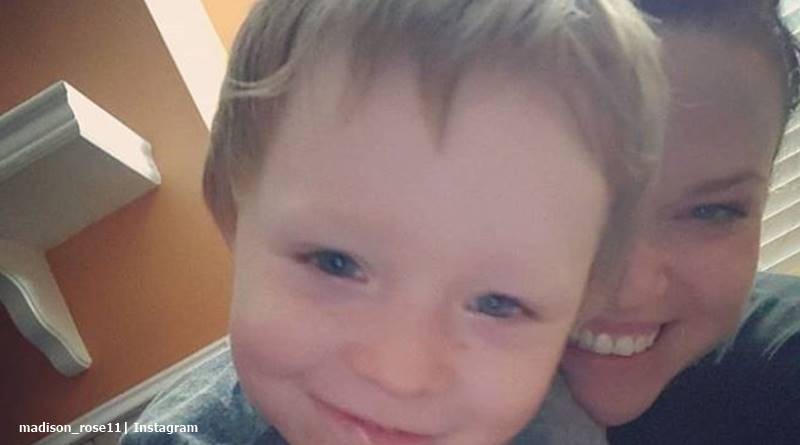 Sister Wives fans know that Maddie Brown Brush now has two kids in her little family. She got candid sometimes, noting that Axel’s terrible twos sometimes made her feel guilty. Now she posted about her son once more. Fans encouraged her as she seemed a bit conflicted and down, despite mentioning some positives.

On the show this season, fans saw Maddie announce her pregnancy with Evie-K. And, little Evie came along during Axel’s terrible twos stage. So, it’s not always easy for Maddie to feel like a perfect parent. TV Shows Ace reported back in November, that she “got candid about the terrible twos.” At the time, she said that “after Evie K was born…Axel “regressed a bit.” She went through a torrid time with Axel who just about “destroyed the place,” when he couldn’t find his pacifier.

On her Instagram, she described how he’d come off it already, but threw the most terrible tantrums after Evie came along. He demanded his pacifier and nearly drove her crazy. So, after speaking to their pediatrician, they decided he could use it again. After all, they really made huge adjustments to the baby already. Bear in mind, as well, that the daughter of the Sister Wives star suffered from some issues. People reported that she was “diagnosed with (FATCO) syndrome, an extremely rare genetic disorder that affects bone formation.”

Fans encourage Maddie as she posts about Axel and unconditional love

Taking to her Instagram on Saturday, February 8, Maddie mentioned unconditional love and how she sometimes struggles. But, quite a bit of her post centered on how much she learns from her son. She wrote, “Every day as this boy’s mom, I am humbled…and… remember how truly niave I am,(sic).” Then she said that she grew as a person and still “grows” as Axel’s mom.

Talking about “unconditional love,” the Sister Wives star noted how “forgiving children are.”

She described Axel as a “sweet boy.” Plus she wrote about his “curiosity and vigor,” which she loves. But she also mentioned that sometimes she gets “frustrated.” Maddie’s thankful that she mothers Axel. Ending on the positives, she noted, “I hope we are continually blessed with lots of laughs and love.” Fans responded encouragingly to her post.

Many fans responded to Maddie, and here’s what some of them said to her:

Every day as this boy's mom, I am humbled, made to be a hypocrite and made to remember how truly niave I am. Being his mom is the most I have ever grown and continue to grow. I learn about unconditional love and how forgiving children are. I am truly blessed with this sweet boy. His curiosity and vigor for life is something I adore greatly. (Although some days I get frustrated.) I am greatful I get to be his mom. 💚 I hope we are continually blessed with lots of laughs and love. . . . #AxelJames #mybaby #myboy #boymom #humility #momlife #myheart #noticethetractor 😂 #atleastwearegrowingintooyherthings #diggingdirt #

What do you think about Maddie’s post on unconditional love and her sweet son Axel? Do you relate to her feelings? Sound off your thoughts in the comments below.

How Is Josie Bates & Kelton Balka’s Baby Hazel Doing In The NICU?
Michael Allio Got Late Wife’s Parents’ Blessing Amid Joining ‘Bachelorette’
Wait, Why Isn’t A New Episode Of ‘Extreme Sisters’ On?!
Khloe Kardashian Reveals Truth About Relationship With Tristan Thompson: Are They Together?
‘Autopsy: The Last Hours Of Dean Martin’ Where To Watch, What To Expect