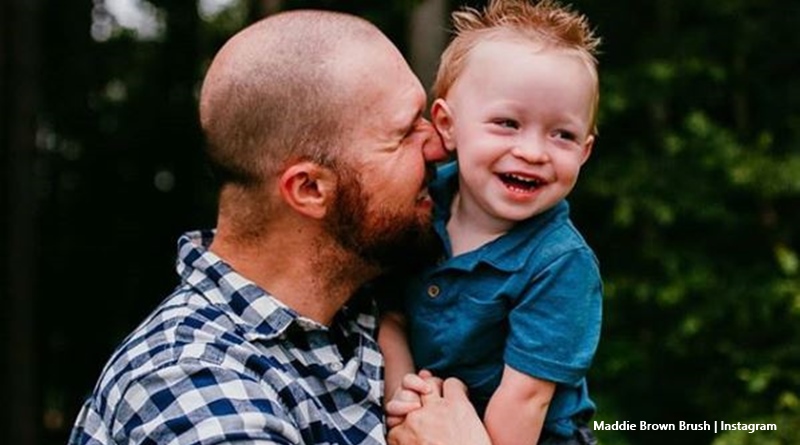 Sister Wives star Maddie Brown Brush got through her son Axel’s mischevious phase back in July this year. But now he’s well into his terrible twos and seems a big handful. More so as Maddie’s busy raising her new baby Evie K. Maddie got candid about it, but also noted how very lovable her son is.

Axel, like most kids just turning two-years-old became mischevious. In July, she shared how the little boy simply wanted some entertainment, so he kept them both awake.  We reported that on Instagram, she showed Caleb and her trying to take a nap. She captioned that with, ‘”All I want is a Saturday nap. All Axel wants is to climb all over us.” But later, after Evie K was born, Maddie shared that Axel regressed a bit. She explained how he insisted on going back to his pacifier. The resulting struggle was just too much to cope with.

The Sister Wives mom suggested doctors felt it was just a small regression due to the new family dynamics. But, maybe a big part of that came from the terrible twos as well. Most toddlers go through the terrible twos. The Mayo Clinic explains why most kids become “difficult” at this age.  They note that many parents struggle with “rapid shifts in a child’s mood and behaviors.” They explain, “two-year-olds …struggle with their reliance on their parents and their desire for independence.” Two-year-olds don’t like too many rules either, and this leads to…out-of-control feelings and tantrums.

On her Instagram, Maddie shared a photo of Axel sleeping. She captioned it with, “Some days I stare at him sleeping and promise to be more patient,” That sounds like every mom in the world. Maddie added that she’d like to be more understanding, more compassionate, and more laid back. Next, she notes, “I promise to not lose my temper as much, to try and understand his point of view. Then he wakes up and my promises do well. They usually last about 2.5 seconds into climbing onto the entertainment center and smacking the TV.” She ended with, “But for now, I’ll stare at my sleeping boy and wonder at his curious mind and pray I survive him.”

Naturally, Sister Wives fans with small kids know exactly what she talks about. One fan commented, “My son is coming into the terrible twos now…and it is a struggle! Last night it was nonstop whining and full blown meltdowns from the time I got home from work until the time he went to bed. But then I miss him as soon as he falls asleep! The toddler years are no joke!” Another agreed, saying, “It will get better. 💜💕❤️.”

Some days I stare at him sleeping and promise to be more patient, more understanding, more compassionate, more laid back and I promise to not lose my temper as much, to try and understand his point of view. Then he wakes up and my promises do well. They usually lasts about 2.5 seconds into climbing onto the entertainment center and smacking the TV. . . But for now, I'll stare at my sleeping boy and wonder at his curious mind and pray I survive him. 😂💚💚 #thisismotherhood #mommylove #momlife #babyboy #terribletwos #letusallpraywebothmakeitthroughthisyear #mytvhashandprintsonit #AxelJames #reallife #hisfavoritecolorisblueifyoucanttell

In no time, Axel should grow out of it

Very soon, Axel should grow out of his terrible two stage. Then Maddie Brown Brush can expect a  bit of a respite before Evie K enters the same phase. But that’s motherhood and any mom will tell you kids are worth every moment. What do you think about Maddie Brown Brush getting candid about Axel and the terrible twos? Did you survive a toddler at that age? Sound off your thoughts in the comments below.