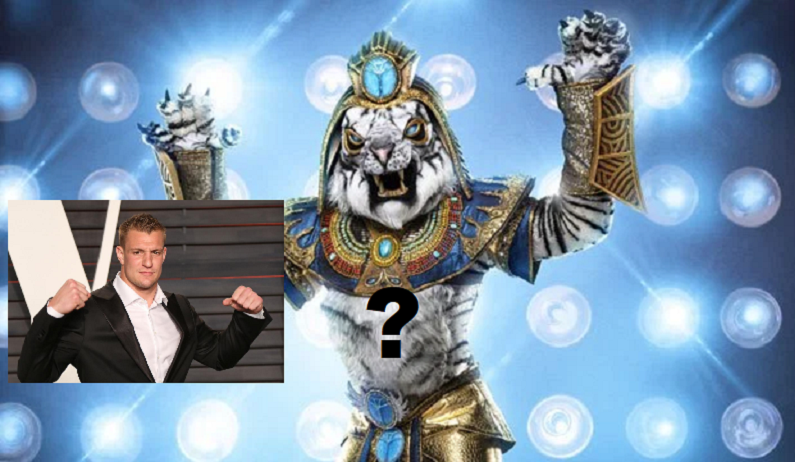 The Masked Singer Season 3 returned in a big way this week, as reported by TV Shows Ace. Viewers already know who they think is hiding under the masks. They believe former New England Patriots tight end Rob Gronkowski is the White Tiger. Fans think it’s so obvious after the first two episodes aired.

Fans were introduced to the White Tiger on Sunday night after Super Bowl LVI. The clue package showed a cow skiing on the slopes. The White Tiger talked about his “work hard, play harder” motto. He also said that he’s “no stranger to celebrating” and that he loves “a good block party.” Fans were instantly reminded of the Gronk.

He’s not hiding himself well enough. That’s what fans seem to think. The retired New England Patriots tight end knows how to have a good time. He was always seen clowning around on the football field. He’s also a big guy. He stands at six-feet tall and 250 pounds, as reported by Patriots Wire. Gronkowski is a big guy with a big personality. So, it makes sense as to why fans would think he’s The White Tiger.

I see you Rob Gronkowski aka The White Tiger #TheMaskedSinger pic.twitter.com/ehs2APkxJy

You can’t tell me the white tiger on the masked singer isn’t @RobGronkowski 🤷🏻‍♂️ pic.twitter.com/FOxYKkUJMY

Totally am saying that @RobGronkowski is the white tiger on #MaskedSinger pic.twitter.com/JN9XpLvC1i

When The Masked Singer first introduced the White Tiger, they gave enough clues to make Patriots fans think that Gronk was underneath the mask. Pats fans know what they’re talking about most of the time. These clues make sense, especially since he now works as a FOX Sports NFL analyst.

“I had no idea how much work went into taking a stage like this,” the White Tiger says.

“I’m putting in the time to hone in this new craft – to put the mass in mask. But my motto is work hard, play harder. I’m no stranger to celebrating. I love good block party. And this might sound kind of crazy, but dancing heals my body after taking a beating.”

On Wednesday night’s episode, the White Tiger performed “Ice Ice Baby” by Vanilla Ice. He didn’t even try. While it wasn’t the best performance of the night, it was surely entertaining. Fans of The Masked Singer immediately knew it was the Gronk. Some identified his voice while others noticed his dance moves. Check out the videos for yourself below.

As Sports Illustrated reported, Gronk hosted his own beach party. It’s similar to the White Tiger’s love for block parties. Gronkowski hosted his own beach party a day before the Super Bowl. He stepped out in a denim vest that featured cartoon of him on the back. It also included the words “GRONK BEACH” in a bold graffiti print. Check out this video of the Gronk hamming it up for the cameras.

Gronk is ready to party pic.twitter.com/8suSzP7rY6

What are your thoughts on the Masked Singer? Who do you think is the White Tiger? Sound off below in the comments section.