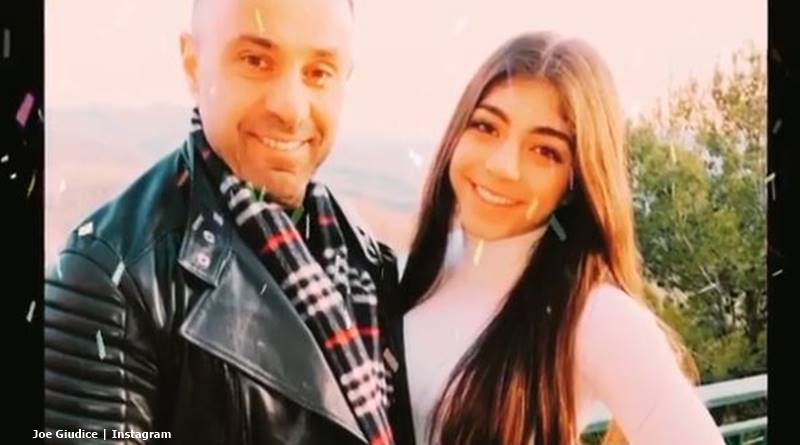 RHONJ star Teresa Giudice shared a photo of her daughter Milania on her 14th birthday. Joe Giudice also posted on her birthday, but somehow he made two mistakes. Judging by his other photos, he’s been hanging out in Havana, Cuba so maybe he got distracted by his friends. The first mistake could be just a phone mistake, but the second one led to Teresa call him out on it.

TV Shows Ace reported that fans slammed Teresa for a birthday post to a clickbait article. But later, she posted a picture of Milania holding up her big balloons showing she’s 14 now. Joe went across to comment on the photo and wish his daughter a happy birthday. But, he spelled her name wrong. Sweetly, he wrote, “Love you millania ❤️🌹😍😍😍😍.” (Note the double “l”). While some fans took him to task, the family didn’t seem to mind. After all, everyone makes a mistake typing on a phone at some stage of their lives.

One fan told critics to just stop, noting, “who cares – if his daughter doesn’t why do you?” But it wasn’t the end of Joe’s mistakes on his daughter’s birthday. The RHONJ star later shared a lovely selection of baby pics on his own Instagram. Thoughtful and sweet, he obviously took the time to select a lot of them showing her as a little kid. But he seemingly made a mistake and Teresa laughingly chided him.

Can’t believe my @milania_giudice356 is 14! Everyday she impresses me! Love you so much my sweet girl! Thanks to @palermoscafe in Little Ferry for this amazing cake!

Poor Joe just couldn’t seem to get it right on his daughter’s birthday. In his own post, he also ran into trouble. He captioned it with, “To my beautiful girl,” and then poured out his love for her. In fact, he posted two lots of photos up for his daughter, and in the first post, he added, “You got me running in circles writing this today so many emotions coming out.”  He said, “I want you know I love you buddy and happy birthday!”

Joe went on to talk about how much his daughter brought “joy and happiness into our lives.” He said that the “memories” of her all  “smiles and laughter…have been some of the best moments of my life!” Most especially, and rather sadly, given the fact they live in different countries, he expanded. The RHONJ dad said, “I WILL ALWAYS BE THERE PARTNER! You will always be my princess of my heart. Love you buddy!” But in the series of photos, he got one daughter wrong.

Teresa chides Joe but kindly, and he reacts

Teresa looked at photos and discovered that Joe put a pic of the wrong kid. She said to Joe, “Hi honey the second photo is GIa LOL 😂.” But Joe denied he made the mistake by error and came up with an explanation. He replied, saying. “thanks I like the message she wrote on it meant a lot I thought to pass it on to her sisters.” Some fans got in Teresa’s face for commenting and “spoiling” Joe’s day, but as you can see from the laughing emoji she as actually having a giggle about it.

Many RHONJ fans said their husband sometimes does the same thing. Well, whether Joe meant to include the photo of Gia or not, really doesn’t matter, some fans think. After all, as People reminds readers, it’s the “first birthday since Joe was released from prison in March 2019.” So no doubt, it’s an emotional time for him.

To my beautiful girl, You got me running in circles writing this today so many emotions coming out I want you know I love you buddy and happy birthday ! You have brought such joy and happiness into our lives. The smiles, laughter, and memories have been some of the best moments of my life! You have your own sense of humor that lights up every room you walk into and the kindest heart of anyone I have ever met. I WILL ALWAYS BE THERE PARTNER! You will always be my princess of my heart. Love you buddy! @milania_giudice356 ❤️🥳😍🎉

What do you think about the two mistakes that Real Housewives of New Jersey’s dad Joe made on the birthday posts for Milania? Do you think it matters? Sound off your thoughts in the comments below.