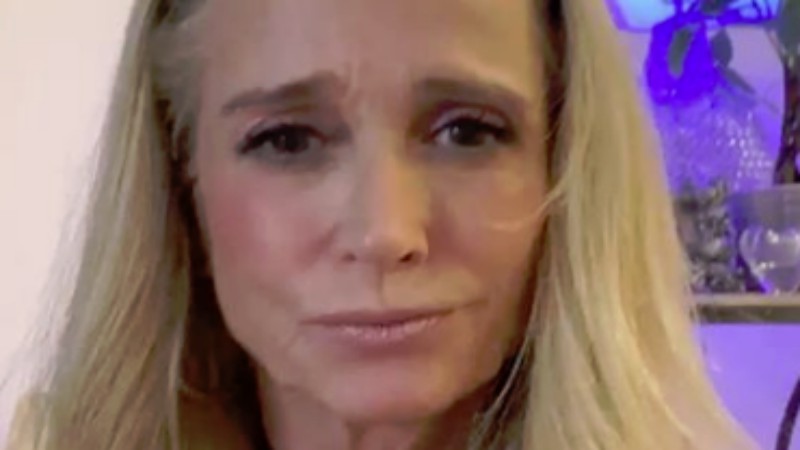 The Real Housewives of Beverly Hills star Kim Richards is about to tell all. The child actress is working on an autobiography of her life. The description from the publisher makes it seem as if no topic is off-limits, especially her strained relationships with her sisters.

As fans know, RHOBH co-star Kyle Richards is Kim’s younger sister. The recent ups-and-downs of their relationship often air on Bravo. Kathy Hilton is the older sister to both Kim and Kyle. That’s right; Kim and Kyle are Paris Hilton’s aunts.

Both Kim and Kyle were aspiring actresses. They had success in their younger years but never made it big until The Real Housewives of Beverly Hills. Kim’s most notable role was in the movie Escape to Witch Mountain.

Kyle had a little more success. She starred alongside Jame Spader in the movie Tuff Tuff. She reprises her Halloween role in the upcoming Halloween Kills.

Navigating through Hollywood as a child isn’t the only issue Kim has faced. A man she was engaged to was murdered… while she listened on the phone. That and other traumatic events from her life will likely be included in the book.

As an adult, Kim battled alcohol addiction that resulted in several high-profile arrests. During Season 1 of The Real Housewives of Beverly Hills, Kim accused Kyle of stealing her house. The two never gave the back story to that argument and fans are eager to see if the book really does reveal all.

Like all siblings, the RHOBH stars fight, make-up, then fight again. However, most siblings don’t have their fights taped, aired on television and then dissected at the reunion. There have been prolonged periods of time in recent years when the sisters didn’t speak. In fact, it was only after Kim left the reality show that their relationship improved.

Their relationship may not withstand what Kim reveals about it. The book is being published by HarperCollins. The publishing company released a description of Kim’s upcoming autobiography that may damage her hard-earned relationship. The statement says,

“The soul-baring confession of a woman revealing what it was like to be treated like a show pony as a child star, as a disposable object as a wife, a whipping post as a sister and as a tabloid commodity as a celebrity.”

The section in bold could very well be referring to older sister Kathy. However, given Kim and Kyle’s tense relationships and blow-out fights over the years…

Reality Tea says Kim’s memoir, The Whole Truth: The Reality of It All, comes out on April 28th, 2020.

Erika Jayne and her husband, Tom Girardi, are no strangers to lawsuits. TV Shows Ace wrote in November that a previous lawsuit was repaid after endless court battles. However, the couple are back into court on another matter.

Tom Girardi has an unpaid loan to the tune of $3 million, Reality Tea reports.

The legal case resulted in some bad publicity for the RHOBH star and her husband. They were accused of using the loan to fund their “lavish lifestyle.” In fact, the Broadway star had to ask the court not to put a lien on her separate bank account.

Now the couple wants the lawsuit to go to arbitration. Such a move would ensure the public wasn’t privy to the details of the lawsuit. A judge has yet to make a ruling on the request.

Meanwhile, Erika is living her best life as Roxy in Chicago.

The rehearsal footage will likely appear on the upcoming season of The Real Housewives of Beverly Hills. Bravo has yet to announce when the show will return to the schedule, but it will be sometime in 2020.