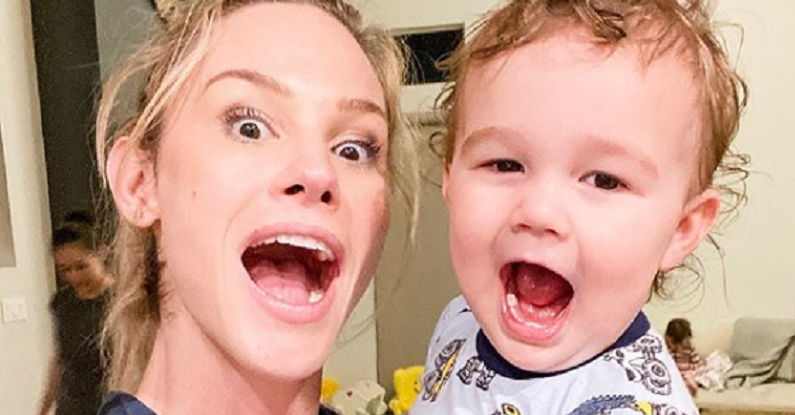 Meghan King Edmonds is getting mommy-shamed left and right. The Real Housewives of Orange County star has recently fired back at the “parent police.” Fans slammed Meghan for allowing her three-year-old daughter, Aspen, to take melatonin. But she is not going down without a fight. Meghan is defending her actions.

The RHOC alum has been making headlines for her messy divorce with estranged husband Jim Edmonds, as reported by TV Shows Ace. The couple split back in October in lieu of cheating allegations. Meghan posted a photo of Aspen on her Instagram Story, where she revealed what happened to her daughter during a recent flight. It’s a seemingly innocent story. But the mommy police came out of the woodwork to slam the television personality.

As Reality Blurb reported, the 35-year-old shared a sweet photo of her daughter sleeping. But there’s a funny story behind this photo. Meghan revealed what happened to make her daughter sleep so much on their flight. Aspen accidentally took a melatonin gummy that she found in her mom’s purse. It turns out that the gummy is completely safe for kids to take.

“[It was] a melatonin gummy for kids, not a sleeping pill and certainly not for an adult,” Meghan King Edmonds confirmed to Us Weekly. “It is completely safe. Aspen found the one little gummy (I had leftover from our flight) in a little baggie while rummaging through my purse.”

Meghan was aware of what her child consumed before she took it. Aspen already asked her if she could take the gummy before their flight took off. According to the lifestyle blogger, the melatonin is age-appropriate. While the instructions say to take two, Aspen only took one and still fell sound asleep.

Now she’s firing back after fans criticized her for allowing her daughter to take the sleeping aid. Meghan felt the need to release a lengthy statement to People in order to “give a full explanation to this silliness.” She also squashed the rumors that she deleted the post following the backlash. She insists that her daughter was “fully supervised” during that time and only took the gummy with her “express permission.”

“The post was cheekier because it’s Instagram that’s what social media is about: a glimpse into our lives – not usually the full story,” Meghan explained. “But, since the parent police are out in full force, I’ve felt compelled to give a full explanation into this silliness.”

But that’s not all. Meghan King Edmonds has also gotten backlash over the comments she’s made over her stepchildren. It seems like she can’t seem to win this week. This comes after she lamented that she wished her stepchildren were her biological children.

During her appearance on Nick Viall’s The Viall Files, Meghan talked about dating and having more children. She no longer wants to date a guy with “baggage,” as All About the Real Housewives reported.

“At the risk of sounding extremely hypocritical, I’m not really into dating a guy with kids,” she stated.

Jim Edmonds has four other children from his previous marriages, including his adult daughters, Hayley and Lauren, a 14-year-old son, Landon, and 11-year-old daughter, Sutton. On RHOC, Meghan exclaimed that she wished her stepchildren were her own. That conversation came up when she revealed how she will explore the dating world following her divorce. She has since changed her tune on being a stepmom.

“I love kids and I love being a stepmom, but it’s just a lot of baggage,” Meghan continued. “And I hate to call kids baggage, but kids are a lifelong commitment and you don’t have any input into creating this child and it’s just hard. I’ve been a stepmom – it’s difficult.”

RHOC fans are upset over Meghan’s remarks. They feel it’s hypocritcal since she once loved being a stepmom to Jim’s children. She even appeared on the cover of Stepmom magazine and sold #CoolStepMom sites on her website.

Jim’s rep responded to People with the following statement: “I wonder how Jim’s children feel about being referred to as baggage. What a disgraceful thing to say.”

What are your thoughts on Meghan King Edmonds’ controversial comments? Sound off below in the comments section.