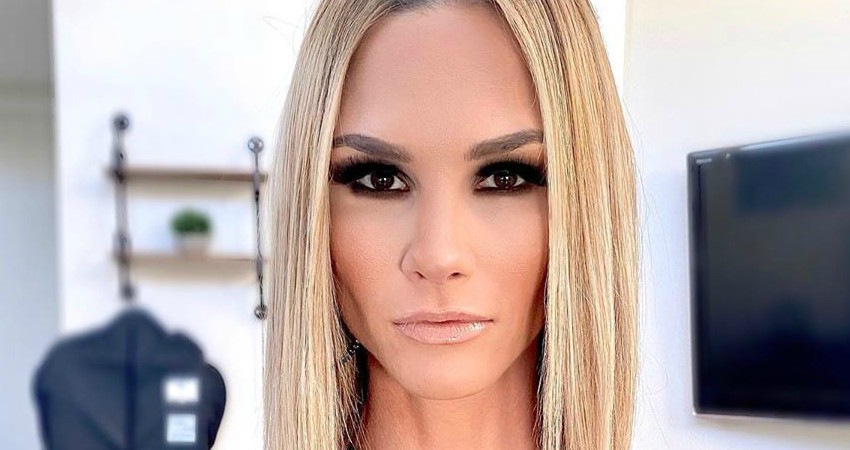 The split between The Real Housewives of Orange County’s Meghan King Edmonds and Jim Edmonds is getting tense again. The estranged couple briefly called a truce after weeks of back-and-forth regarding rumors of an affair with the nanny.

However, Meghan recently opened up on her podcast, Intimate Knowledge, about finding out her ex is dating someone new. Someone she knows.

Meghan announced in December that she would be co-hosting a new podcast with actress Brooke Burke. Brooke was recently divorced from actor David Charvet. The former RHOC star promised fans a raw look at marriage and divorce.

An earlier episode of the podcast focused on how Jim sending illicit text messages to another woman affected their marriage.

I’ve listened to the latest @intimateknowledgepodcast three times and I can’t stop crying each time. Each time I think about it I feel like this 👆🏼. I feel small. I feel like a target. And I feel like my opponent is bigger and meaner than me. (But sometimes that “opponent” comes in the form of the public tearing me down. It hurts, I’m a real person.) Please lift me up today. Thank you for the love.

According to Reality Blurb, Meghan suspected the friend and Jim kept sleeping together without Meghan.

After her friend began showing up with new jewelry and cars, Meghan became suspicious. She said on the podcast,

They almost acted like I was the one who was out of something and I remember asking, ‘Why were you guys so weird?’ And he made up some excuse.”

Jim Defends Taking Another Woman to Cabo: ‘The Marriage is and Has Been Over’

The Real Housewives of Orange County star told listeners that Jim is dating the friend again now. She emotionally detailed how she found out about the affair, as she called it. Meghan said,

She went shopping with his credit card at a very expensive store, telling all the people that her boyfriend was taking her to Cabo tomorrow.”

Jim defended himself to E News! He said that Meghan hasn’t spoken to the “friend” in years. Furthermore, the Cabo trip was for a surprise wedding and the woman attended as his plus one.

In her podcast, Meghan shaded her ex for spending money on vacations instead of helping with their son, Hart. As fans know, Hart has irreversible brain damage and is undergoing therapy in Los Angeles.

However, Jim is not here for Meghan’s accusations. He called out his estranged wife for using Hart as an excuse for everything. He said,

It makes me sick that she is using our child as a crutch for the whole world to see.”

All Photos of RHOC Star Wiped From Ex’s Instagram

Dating another woman isn’t the only sign that Jim is ready to move on from his marriage. Us Weekly notes that all photos and mentions of Meghan were removed from her ex’s social media account recently.

However, photos of the former couple together remain on Meghan’s Instagram.

Meghan wrote a blog post recently where she seemed outraged to be known only as a baseball player’s wife. She recounted calling her mother to announce being a star after TMZ spent seven minutes interviewing the former RHOC cast member.

TV Shows Ace reports that Meghan is interested in returning to the Bravo hit show now that she is supporting her three children as a single mother. The cast of the upcoming 15th season of the original franchise are reportedly up in the air after a stale Season 14.

The Real Housewives of Orange County will likely return to Bravo later this year. Stay tuned to TV Shows Ace for news regarding Meghan’s possible return and other news.