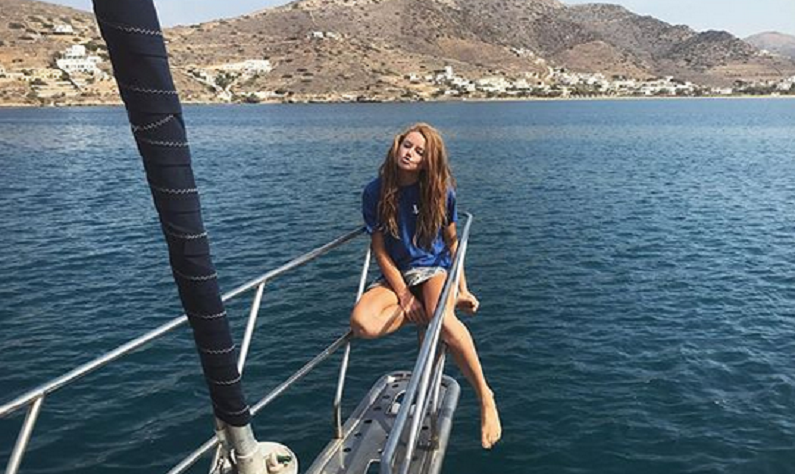 Below Deck star Abbi Murphy is recounting her time on the series. She’s made it clear that she wants to remain neutral when it comes to the boys’ club. Fans weren’t happy when she was so quick to defend them on social media. But she had a different experience than deckhand Rhylee Gerber. Rhylee returned as Abbi’s replacement and that’s when the tone shifted between the genders.

Abbi was on at the beginning of Below Deck Season 7 alongside Ashton Pienaar, Brian de Saint Pern, and Tanner Sterback. She fit in well with the rest of the crew even if she had trouble keeping up with the job. And the guys treated her with great respect. But Abbi wasn’t feeling it. She was distracted most of the time. Then her boyfriend (now husband) popped the question and she left the boat to be with him.

How does this ‘Below Deck’ star feel about the boys’ club?

Fans are shocked that Abbi is trying to stay on the guys’ good side. Surely, she must’ve watched the episodes where the boys’ club attacked Rhylee Gerber and tried to get her fired. Abbi wants to make it clear that she’s team neutral. As Showbiz CheatSheet reported, Abbi shared a video the guys sent to her of the infamous van incident.

“Apparently, before everything went to s**t, the guys sent me this kind message,” Abbi wrote. “Sad to see this loving energy wasn’t present on the boat.”

Apparently, before everything went to shit, the guys sent me this kind message. Sad to see this loving energy wasn’t present on the boat 💔#belowdeck pic.twitter.com/wFrL9ITOV2

But then Abbi remarked that if she witnessed the same incident, she wouldn’t be happy as well. The Below Deck star had a change of heart over her previous comments. She later explained what she was talking about. Abbi made it clear that she wasn’t defending the guys’ actions. She doesn’t stand for that type of behavior either.

“I don’t support what happened after I left,” Abbi later wrote. “I simply stick to my experience, and I try not to comment on anything that I don’t have a place to comment on. If that makes sense.”

Since the filming of #belowdeck I’ve polished up my overall look… less messy, more mature & classy. BUT, I still stay true to my boho, free-spirited style. And this post is basically about finding your style niche & sticking to it! . . . I thought about wearing a stand-out, emerald green dress.Until I realized I didn’t feel like me while wearing it. . . . I purchased this black body suit in Santorini a few years ago.The straps are basically two free-standing strings that you can wrap around yourself in any way you prefer.I loved getting creative with this! . . . Once I paired the bodysuit with the boho maxi skirt I truly felt like a fancy version of myself. Like any girl, I stressed about what I’d wear and how I’d look, but I’m so pleased with the outcome.And that’s because I dressed for ME ❤️

Then fans accused of her pandering to both sides. Abbi didn’t see anything wrong with it. She insists on remaining neutral on the matter. She will not insert herself in the drama and doesn’t intend to anytime soon.

Nearly every man was dragged on social media throughout Season 7 of Below Deck. But Abbi doesn’t think believe that Brian de Saint Pern should be lumped in with the other guys. She thinks that he’s still a good guy despite the way he treated Courtney Skippon, especially after their awkward date.

“I’m pretty sure Brian was polite 99.9% of the time,” Abbi remarked. “I don’t think he should be categorized as an a**hole.”

According to the Showbiz CheatSheet report, Brian made some remarks during his appearance on the Below Deck After Show that didn’t go over well with fans. One fan addressed that, to which Abbi said that she’s speaking from personal experience. She claims not to watch any of the after shows or interviews. She still believes that Brian is a “positive, nice person.” She then asked Below Deck fans to allow the male crew members to grow and learn from their mistakes.

What are your thoughts on Abbi Murphy supporting the boys’ club? Sound off below in the comments section.

Don’t forget to check back with TV Shows Ace for the latest news on the cast of Below Deck.