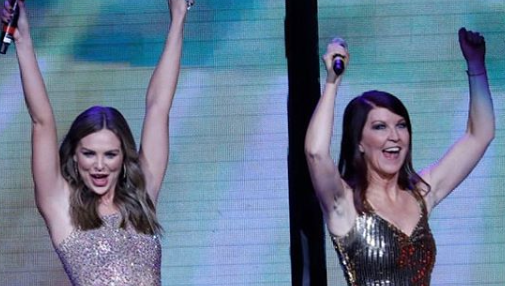 Hannah Brown has been busy lately. After appearing on both DWTS and The Bachelor she’s been the source of a lot of news. She recently couldn’t help but take a dig at her former flame, Jed Wyatt. Hannah was on tour with the Dancing with the Stars crew.

When Hannah took the stage the first time for the tour, she said, “I obviously don’t know how to date … but it’s Chris Harrison‘s fault!” Fans think not only talking about it but going back on Peter Weber’s season and losing it shows she may not quite be over how her season turned out. Hannah also took a jab personally at the winner of her season.

What Did Hannah Brown Have To Say About Her Engagement

When Hannah Brown took the stage an audience member reported she said her trophy from the show had, “already lasted longer than her engagement ring. Clearly that was directed at Jed but Hannah went on to say going on dancing with the stars was the right choice according to Life and Style.

The live performance took place at Radio City Music Hall. Hannah and her partner Alan gave a stunning performance. The source said, “Hannah looked great being back on the stage and getting to dance again with Alan. Her face lit up and she was smiling the entire time,” gushes the source over their performances. The two performed to, “Lover,” by Taylor Swift and wore costumes from the spicy paso doble of week 3. Fans had hoped she might find love with Alan, but Hannah said the two were just friends and she was focusing on herself.

Fans Are Still Very Invested In Their Love Life

Alan had told media that the trip and meltdown she had on the new season of The Bachelor helped them establish trust. Hannah Brown was on the new season of DWTS when she returned to The Bachelor. She hadn’t expected to have such an emotional reunion with Peter Weber. The source said, “she seems really comfortable with Alan like he has become a really good friend.

I think it’s safe to say I had the best time back with my @dancingabc people. Never in a zillion years would I think I would perform at a sold out show at Radio City Music Hall—like, what?!?! It was a blast! I am so very thankful to everyone who came out to the show to cheer us all on—and to all of you who continue to cheer me on in all the fun adventures life has had in store—THANK YOU!!

Hannah Brown’s fans still really want her to find love.  There have been rumors she ended up with Peter Weber at the end of his season. There are also some fans lobbying for her to be The Bachelorette again. Only time will tell what’s in the fates for Hannah’s future. Fans will be watching to see what she does next.