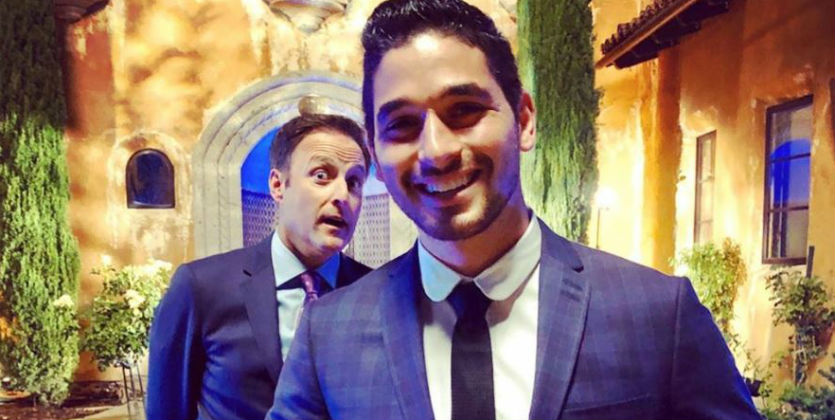 DWTS team Alan Bersten and Hannah Brown won in more ways than one. They won the Mirrorball trophy, but they also gained a forever friend in each other. Alan admits he has always been there for Hannah. He is now talking about Hannah’s return to The Bachelor to see Peter Weber. Keep reading to find out what Alan had to say about how the reunion affected her dance performance.

Alan speaks out about Hannah’s performance

US Weekly caught up with Alan to discuss the upcoming Dancing With the Stars Live Tour and also asked him about partner Hannah Brown. They talked to him about Hannah’s return to see Peter when the premiere night was filmed. They also mentioned her return to host the group date that never actually ended up happening. Alan says it all did affect her.

Alan said, “She is a very honest person and I think she’ll say that it did affect her and you know, at the time, I wasn’t 100 percent aware of everything that was going on. She told me some things … luckily I was able to help her get through it.”

The first night she was with Peter was September 19, just three days later Alan and Hannah danced on the DWTS premiere. Following that night, Hannah returned to The Bachelor on September 24. This appearance was just one day after week two of DWTS. Alan admitted Hannah would get emotional during rehearsals, but he just did his part and lifted her up. He was always there to reassure her about things.

Where do I start? @hannahbrown words can’t describe the feelings I felt last night. WE DID IT. You never gave up, you always gave me more than I expected ( and I expected a lot) and you really allowed yourself to be vulnerable on that dance floor! You have inspired me Hannah, anything is possible, and I want to thank you for giving me the best season ever! I’m still shocked!!! What could be better than our scream before we dance? Wwwhhooooooo!!! #teamalanbamahannah forever!!! You are the best partner!

He admits Hannah’s feelings were real

Alan continues on with the interview saying, “It was a very real moment and you know, she realized that I was there for her. If she needed anything I could help her own and she could confide in me.” He continued saying, “I don’t watch the show enough to know enough about Peter, so I want her to be happy.” Other than that, Alan did not want to comment on Hannah’s relationship with Peter.

Alan and Hannah are reuniting in New York to kick off the Dancing With the Stars tour. Their first show is January 28. He says touring is much less stressful than performances during the show. He says everyone just enjoys it and has fun.

As the new year approaches I can’t help but reflect on this past year. What an incredible year! What an incredible decade! I wanted to say thank you to everyone who has always supported me! Everyone reading this has impacted my life more than I could ever imagine! I am forever grateful that I get to do what I love, every single day! Thank you! And thank you for making my dreams come true, never in a million years did I think I could say that I have a mirror ball!! Let’s make 2020 the best year yet! Stay safe and have fun! I love you guys so much!! 🙏🏼❤️

Alan says he is still in shock over winning the trophy

Woman’s Day caught up with Alan as well and asked him about his incredible win during this past season of DWTS. Alan said, “Honestly I still can’t believe it, it’s a dream come true. It’s just a shock.”

Alan says he built a little podium in his home to display the trophy. He also may bring one of the trophy’s out on stage during the tour to show fans. While he is looking forward to the tour, he is also excited about next season of DWTS.

He said, “Dancing With the Stars has been a dream of mine since I was 10 years old, so the fact that I’m on the show and I’m a pro on the show and I just won the show, it is a dream come true and I want to continue living that dream every day that I can, so I very much look forward to the next season of Dancing With the Stars. As for celebrities, I don’t really have a celebrity wish. I just want someone who wants to be there and enjoy it and go on a journey. You know I’ve been very lucky to have that in the past, so whoever I get I’ll be more than happy to be dancing with.”

He says he was very proud of Hannah throughout the season. She showed great improvement with each performance.

Are you planning on catching one of the DWTS Live shows? Who are you excited to see? Stay tuned to TV Shows Ace for more information on DWTS.

Jessica Batten Of ‘Love Is Blind’ Gets Happily Ever After
Josh Duggar Files Motions To Suppress Evidence, Government Responds
‘Sister Wives’: Christine Brown Gives Robyn A Big Slap In The Face With Latest Move?
‘When Calls The Heart’s’ Chris McNally Strikes A Pose With Erin Krakow
‘Bachelor In Paradise’ Kendall Long Reveals Why She Joined The Show