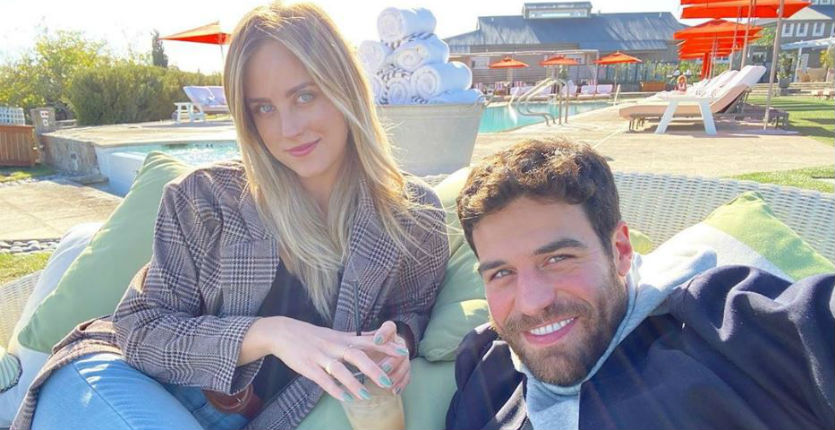 Bachelor in Paradise fan favorite couple Joe Amabile and Kendall Long ended their relationship this week. There had been speculation that there may be issues due to their lack of posts about one another over the past weeks. Yesterday Joe and Kendall broke their silence. They released a statement together announcing their split. Today, however, it is obvious the two are still on good terms.

Is there still hope for Joe and Kendall

Joe and Kendall say it’s over, but is it? Joe posted a photo of himself tonight. The picture is a somber photo of Joe on an airplane. He captioned it saying, “Never gave her the photo credit when we were dating, so it’s only fair… 📸 @keykendall88 #mug.”

Kendall even replied back to his post. She said, “It’s about time 😂.” She also went to Instagram to share a photo of herself. The picture appears to be at a vineyard. Kendall’s caption was much more indicative of a difficult time. She said, “When you can’t control what is happening, challenge yourself to control the way you respond to what’s happening. That’s where your power is.”

Joe replied to Kendall’s post as well. He said, “Way too much wine 🍷 that day.”

It is obvious to all that Joe and Kendall are still on good terms. Normally after break-ups couples do not comment jokingly on each other’s social media. These two are handling their situation with grace and also getting fans hopes up.

Many fans are already commenting that they are still in love. More are saying they need to get back together. Will they listen? Are they still in love?

Cosmopolitan shared details about Joe and Kendall’s very unexpected announcement. Their announcement said, “We have decided mutually to go our separate ways. Joe has made the decision to move back to Chicago while Kendall will be remaining in her hometown of Los Angeles. Our family and friends have always been an extremely important element to who we are as people. We can’t imagine continuing our lives without them closer, especially when thinking of starting a family of our own one day. We both respect each other’s decision and still have a great deal of love for each other. We appreciate all the love and support everyone has given us throughout our relationship.”

Joe and Kendall’s split was completely unexpected. Fans had been awaiting an engagement announcement. Instead they got quite the opposite. With their friendly posts towards one another it does look like they are still on good terms. Will they get back together? Only time will tell. Stay tuned for information as it happens.