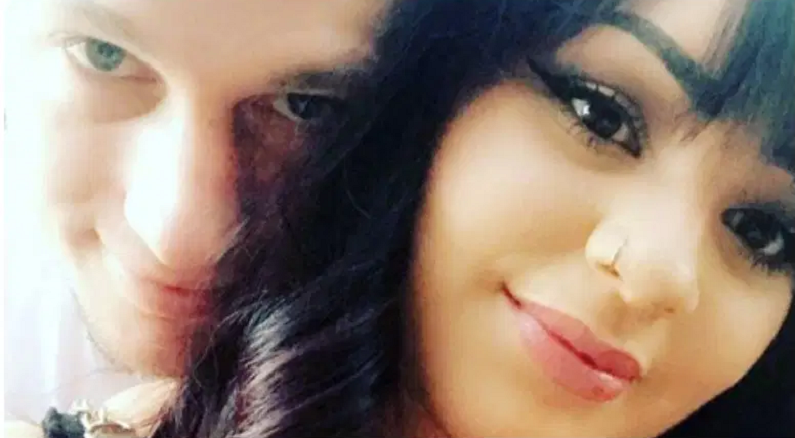 90 Day Fiance star Tiffany Franco made a shocking revelation on Instagram. She announced on Tuesday, Jan. 28 that she and her husband, Ronald Smith, are ending their marriage. The TLC star revealed that she has decided to file for divorce after she caught him lying more than once. This comes as a shock to 90 Day Fiance fans since Tiffany and Ronald became a fan-favorite for appearing normal and drama-free.

Tiffany has been going through some major changes lately. As TV Shows Ace reported, she’s been documenting her weight loss journey on social media. Tiffany dropped 20 pounds following the birth of her baby girl, Carley. Now it looks like the couple is headed for what could a messy divorce since there’s a child involved.

According to YouTuber Katie Joy, Tiffany Franco and Ronald Smith have decided to end their marriage. The 90 Day Fiance star told fans on Instagram that she caught him in a lie. Both Tiffany and Ronald have announced on their respective Instagram accounts that they are separating.

“Unfortunately, I have to announce that Ronald and I will be separating,” Tiffany wrote on her Instagram Story. “I wanted to be the first to let you know rather than hiding it and putting on a façade for social media.” 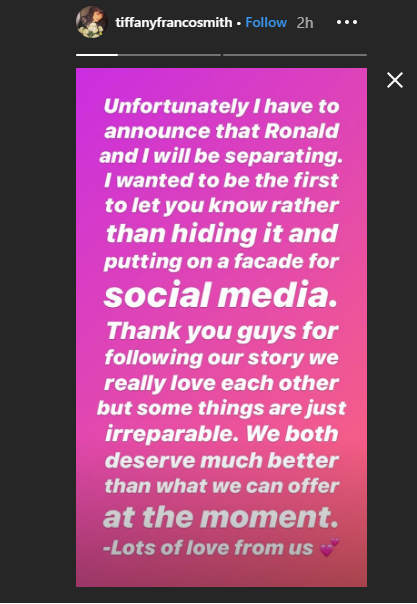 Moments later, Ronald took to his own Instagram account. He revealed that he will be the one to file the divorce papers. He also implied that their split was his decision.

“Sorry to inform you all that I have decided to leave Tiffany due to certain reasons,” Ronald wrote on his own Instagram Story. “Thank you for following our story but unfortunately it just didn’t work for me I’ll be filing for the divorce in SA since she isn’t even registered in USA as married. Talk about adultery.” 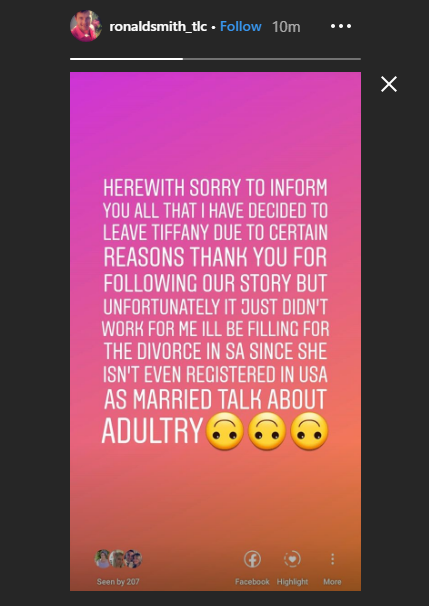 Is Ronald accusing Tiffany of cheating? Katie Joy asked Ronald about his statement. He claimed that Tiffany was “effing around” on him because she registered as married in the U.S. He also accused Tiffany of being “controlling” and accusing him of “lying about stuff.”

Ronald also accused Tiffany of not visiting him enough. She filed for the CR1 visa instead of the K-1 visa so they could be together in South Africa, but their marriage continued to have other problems.

Tiffany shared screenshots of her heated exchanged with Ronald. In some of the text messages read by Katie Joy, Tiffany accused Ronald of lying about his finances. She claims that he took forever her to pay her back on a loan. Ronald also lied about his money and his whereabouts most of the time. On 90 Day Fiance: The Other Way, the couple often argued about Ronald’s gambling problems. He just left a treatment facility for his addiction before they got engaged.

Tiffany also told him that she wished she never married him. She claims that Ronald only cares about his motorcycle, his friends, and money. Tiffany feels like she’ll never be enough for him. Ronald warned Tiffany that he’ll reveal how much of a bad mother she is. Clearly there is a lot of drama between the couple.

Tiffany is not 100% sure if Ronald cheated on her. But she did send Katie Joy several photos of two women he allegedly hung out with. Tiffany said he was hanging out with a guy friend and sent her a photo of where he was. That’s when she found out that he was at Nookie and Maxine’s house, not with his friend.

Shares before and after weight loss photos

This shocking news comes after Tiffany shared her weight loss journey on social media, as reported by In Touch Weekly. The television personality said that she lost 20 pounds after she welcomed her second baby in July. Tiffany took to her Instagram Story to reveal what her body looks like now. She’s been spending a lot more time in the gym lately. Maybe this transformation was inspired by her marital problems.

What are your thoughts on Tiffany and Ronald ending their marriage? Are you sad or happy for Tiffany? Sound off below in the comments section.

Don’t forget to check back with TV Shows Ace for the latest news on your faves from 90 Day Fiance.