MAFS spoilers are coming out all the time this season. New spoilers are out about how Michael and Meka are doing after their decision day. It turns out that this Married at First Sight couple doesn’t work either. MAFS Fan on Instagram went to their page today to share that a spoiler was coming on their story. They later shared the details.

MAFS spoilers for Michael and Meka

The spoilers are out and things are not looking good for Michael and Meka. It turns out that these two don’t even consummate their marriage. Check out what was shared on MAFS Fan’s Instagram Story today. If you don’t like spoilers, stop reading now. 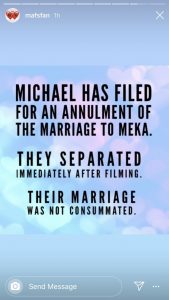 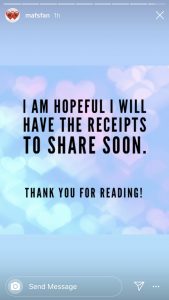 So it turns out that they get an annulment. Since they never consummated the marriage that does work out for them. It looks like viewers will see the drama between them this season. It will end with the marriage not working out.

That awkward moment when you and your husband of five minutes are NOT on the same page about children. Thoughts? #MarriedAtFirstSight

The other couples this season

Spoilers are out that Mindy and Zach won’t work out either. They will end up getting a divorce. It turns out that there are rumors that Zach had a bit of an emotional affair on her. It wasn’t anything physical from what it sounds like, though. Brandon and Taylor also decided not to stay married. This isn’t just a spoiler. These two actually shared the news on their own.

That only leaves two couples left this season to try and make it work. If they don’t end up having more luck, it wouldn’t be shocking if this show comes to an end. The concept is great, but if nobody stays married, what is the point?

Don’t miss the new episodes of Married at First Sight on Wednesday nights on Lifetime. The couples just got married and so now it is time to watch the relationships fall apart and see if the other two can make it work.