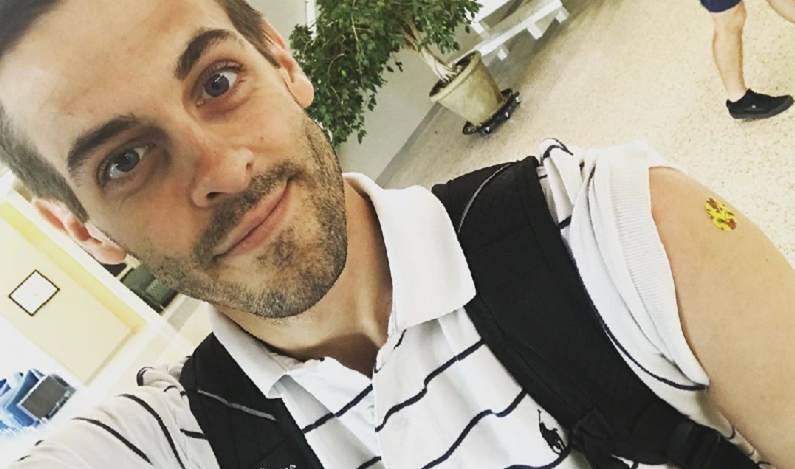 The Duggar family drama just won’t let up. Derick Dillard is still talking about being fired from TLC back in 2017. He hasn’t gotten over it. The former reality star takes every opportunity to trash the network on social media. Not very Christian-like behavior.

It’s only been three years since Derick Dillard got fired from Counting On. His wife, Jill Duggar, quit the series as a sign of support. While he appreciated the nice gesture, he’s still not over his firing. As TV Shows Ace reported, fans wondered if the couple was hard up for money. He said that he supports his family by working as a Grub Hub driver.

It’s not just on his minds. It’s also on the mind of Duggar fans. They bring it up because they know he’ll continue to talk about. Derick initially denied the rumor and claimed that he and Jill left the show on their own terms. He was reportedly fired for posting transphobic tweets about fellow TLC star Jazz Jennings.

However, reddit users found that there could be more to the story. A comment from a fan on Instagram showed support for Jill and Derick. They believe the tweets were “a strategic way to get off the show, because he said, it was driving them to the brink of insanity, further making an abuse victim film so the show could go on.”

The fan concluded their comment by adding, “He threw himself onto a chopping block for his wife … and it worked.”

While most of the fans on the Duggar subreddit believe the story, others are not convinced, as Showbiz CheatSheet reported. It’s not clear whether Derick used his tweets to get him and Jill fired from Counting On. The couple probably regrets their decision. Derick can’t even make a full-time income. Instead, he’s become a bit of a social media troll.

He’s doing everything in his power to tarnish TLC’s reputation but it’s not working. As reported by The Hollywood Gossip, Derick responded to a three-year-old tweet by claiming that TLC “forced” his wife to appear in a promotional shoot for Counting On. Keep in mind it took him three years to come up with a response.

The tweet took place on Friday, Jan. 17, in which the ex-reality star responded to a tweet posted back in February 2016.

“Notice how we were not a part of the promotional for this,” Derick responded. “They tried to force Jill to be in the promotional pic for this show, but we refused. So they just inserted other sisters from the home.”

Derick made it clear that he and his wife will never appear on the series again. Last month, he revealed on social media there was “no chance” for a return to happen.

He took a break from Twitter to rant on Instagram. In his latest comments to fans, he addressed the tabloid reports about the Duggar family. He thanked the fan for their support and said there’s only so much he can do about these stories.

“Living a life in the public’s eye has taught us that it is best not to reply to every rumor and piece of ‘fake news’ that is circulated online,” Derick wrote. “It would be a full-time job if we attempted to do so.”

Derick and Jill have been criticized for taking mission trips in the past. Duggar fans slammed the couple for asking for donations so they could do outreach work in Central America and Mexico. Fans even accused them of using the funds they raised for other purposes, reports Showbiz CheatSheet.

What are your thoughts on Derick Dillard’s social media comments? Do you think there is some truth to it? Sound off below in the comments section.